Skip to content
The Northern Westchester Examiner
July 23, 2014 Rick Pezzullo
We are part of The Trust Project

A clean water watchdog organization released a report last week revealing many locations in the Hudson River fail to meet federally recommended guidelines for safe swimming and other recreational activities.

According to the “How’s the Water? 2014” report from Riverkeeper, 23 percent of monthly samples for bacteria that indicates sewage and other fecal contamination from 2008-2013 failed the Environmental Protection Agency’s (EPA) safe swimming guidelines, and 61% of the 74 locations in the Hudson failed EPA criteria for recreational water.

“The Hudson River and its tributaries are the public’s beach, and the public deserves clean water,” said Paul Gallay, president of Hudson Riverkeeper. “That right is enshrined in the Clean Water Act, and it’s our job to stop the pollution that too often makes the water unsafe for swimming.”

Riverkeeper pointed out exposure to pathogens in recreational waters soiled by fecal contamination can cause a variety of severe and life threatening illnesses, including vomiting and diarrhea. Riverkeeper samples locations between New York Harbor and Waterford and in tributaries monthly from May to October in collaboration with scientists.

Testing of tributaries found they are often more contaminated than the river itself and act as pollution sources.

“The good news is that bacterial counts of 77% of Riverkeeper’s samples in the Hudson River Estuary were within EPA guidelines for safe swimming,” said Captain John Lipscomb, director of Riverkeeper’s Water Quality Program. “We are confident that the public, when informed of water quality problems, will demand and support waste water infrastructure investment.”

To improve the swimming quality of the Hudson, Riverkeeper maintained state and local funding must be preserved and expanded for wastewater infrastructure, pollution enforcement and water quality monitoring.

While the Westchester County Health Department tests Croton Point Beach, Riverkeeper suggested the county should expand its testing to other locations on the 150-mile-long Hudson and its tributaries used for recreation and create a model to guide beach closure decisions.

No government agency tests the water for pathogens in Putnam County, according to Riverkeeper. 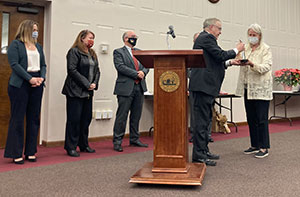 Puglisi Looks Back on 34 Years in Cortlandt Government