Skip to content
The Northern Westchester Examiner
August 20, 2014August 21, 2014 Rick Pezzullo
We are part of The Trust Project 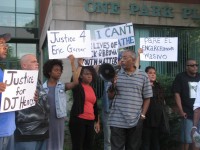 Armed with posters saying “Hands Up, Don’t Shoot” and “No More Michael Browns,” about 50 community members held a peaceful rally in Peekskill Wednesday night demanding a congressional hearing into police brutality and an end to racial profiling.

The demonstration outside the Park Place offices of Senator Chuck Schumer (D-NY) was triggered by the recent fatal shooting of unarmed black teenager Michael Brown by a police officer in Ferguson, Missouri, who has yet to be charged.

“We’re here to show support for residents of Ferguson and justice for Michael Brown,” said Darrell Davis, a longtime community activist and leader of the Committee for Justice, which organized the rally with WESPAC (Westchester County for Peace and Justice).

“This is not a symbolic gesture. We really want congressional hearings,” Davis stressed. “If we really want change we have to continue to embarrass America on a grand stage. We’re not here to be right or wrong. We have to be united. This issue is cutting across America.”

Gary Shaw, a white man from Croton who noted he was married to a black woman, wore a t-shirt that read “Unharmed Civilian” and contended racism was running rampant in Peekskill and elsewhere.

“Police make assumptions that someone of dark skin is always (up to no good) and it has to stop,” Shaw said. “It happens all over the place. This is a national problem and it’s getting worse with military equipment being used on citizens.”

Protestors maintained Schumer had the pull in Washington D.C. to get lawmakers to take the issue seriously.

“Who better than a very senior senator on the Judicial Committee to come out and speak about the racism in police departments?” Shaw said.

Davis also claimed a major problem existed in Peekskill with young black males being “stopped and frisked” by police officers. “It’s been going on for a while but people are fed up,” Davis said. 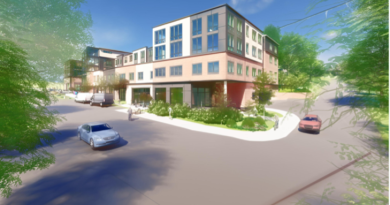 Six Vie for Three Seats on Hen Hud Board of Education