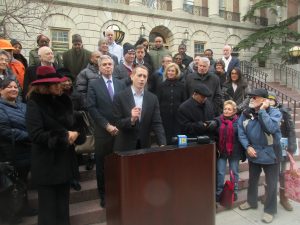 Jeremiah Frei-Pearson, 41, making his first run for political office, announced his entry into the race surrounded by a legion of White Plains Democrats, including Board of Legislators Chairman Ben Boykin and Mayor Thomas Roach. He is one of as many as five Democrats that plan to vie for the party’s nomination for the seat to succeed Assemblyman David Buchwald, who is running for Congress.

“I am running for this seat because we are at a critical time in our community’s history and in our country’s history,” Frei-Pearson said. “The atmosphere from Washington, D.C. is deplorable. We’re being divided. We have the federal government, which isn’t working for the people and is targeting the most vulnerable amongst us. We can change that in New York State.”

Although this is his first run for office, Frei-Pearson is no stranger to politics. He had considered running for the seat in 2012 when Buchwald was victorious and also weighed challenging a former state senator who opposed marriage equality when he still lived in Queens.

He was appointed by Roach to serve on the Sustainable White Plains Committee and on the Mayor’s Advisory Committee for People with Disabilities and served as chair of both committees.

“He’s right on the issues, he understands how to work with people and he knows how to make things happen in government,” Roach said. “That’s what we need in Albany.”

Frei-Pearson said he would differentiate himself from the other Democrats by pointing to his record of advocating for social change on a large scale. He said he and his law firm traveled to the southern border to fight for the rights of migrants who were being separated from their children and recovered millions of dollars for workers that had been paid under the minimum wage by unscrupulous employers.

In Albany, Frei-Pearson said he would also look support implementing parts of the Green New Deal to help New York do its share to combat the climate crisis.

He has lived in the district most of his life, having grown up in Mount Kisco and Bedford and graduating from John Jay High School in Cross River.

“There are so many amazing people who have lots of needs, from affordable housing to health care to the kids in this district who live in poverty, from small business owners, like I am, who want to be free from regulation, and I think I can deliver some real results and make change with that,” Frei-Pearson said.

Boykin said his legal work has made Frei-Pearson a champion of those in need.

“He’s always working to help those less fortunate,” Boykin said. “So we need someone who can be the voice for the voiceless, to be the one who can advocate for those who can’t advocate for themselves and to work to make sure we have representative legislation to help us throughout the 93rd Assembly District.”

The White Plains Democratic Committee officially endorsed Frei-Pearson on Dec. 26, even though he had yet to officially declare as a candidate.

Frei-Pearson appears headed to a June 23 primary against at least three other Democrats who have also officially announced – Bedford Supervisor Chris Burdick, Chappaqua attorney Kristen Browde and White Plains resident Alex Roithmyar, who has worked for Buchwald as a community liaison and as chief of staff.