Skip to content
The Northern Westchester Examiner
January 1, 2018 Rick Pezzullo
We are part of The Trust Project 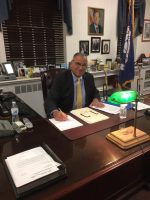 In his final meeting as Peekskill mayor, Frank Catalina outlined a series of accomplishments during his four-year administration and reflected on what leading the city where he grew up meant to him.

“Serving as mayor has, without any doubt, been the highest honor of my lifetime and one I will forever be grateful to the citizens of Peekskill who twice elected me to serve,” Catalina said at City Hall last week where he received loud applause and a standing ovation from those in attendance.

“When I took office, this city was, financially, a disaster,” he said. “We addressed these very serious financial problems head-on. On the day I took office, I said we could not tax our way out of these problems and that the path to financial security was through the growth of our tax base. That’s exactly what we did.”

“Development expands our tax base while, in most cases, adds little to the city’s cost of providing services. Development is not a bad word and developers are the friends and benefactors of municipalities, not our enemies,” Catalina said. “While development certainly does not start with elected officials, it can be quickly stopped by elected officials who are close-minded and those who fail to see the short and long-term benefits of new smart and exciting developmental projects.”

“I urge the incoming administration to recognize the strength of any city lies in its business community and the fuel that drives the business community’s success is, quite simply, residential and commercial development,” he added.

Catalina, who presented Rainey with the keys to City Hall, along with a specially designed mayoral shirt and sweatshirt, cautioned the new leadership to avoid lawsuits, bonding and “needless and useless” studies, and to always keep the Oath of Office in mind when governing.

“You are taking an oath to follow the Charter and to not only obey laws, but to uphold them when others do not,” he said. “And that means all of the laws, not just the ones you agree with. Following your oath is the best way to maintain your integrity. Remember, upholding the law and sticking to your oath is easy when it’s easy but when public opinion, personal beliefs, or pressure from others urges you otherwise, that’s the hard part and that’s exactly where your integrity will be tested. If you want to take an action contrary to existing law, change the law rather than break your solemn oath for personal or political reasons.”

Rainey, a Democrat who was sworn-in January 1, thanked Catalina for his guidance to ensure a smooth transition.

“I don’t think I could have learned more under any other mayor than Frank,” Rainey said. “I respect the love you have for the city. I think your passion for the city is stronger than mine because you have been here longer.”

“You did just what you said you were going to do,” Gomez said. “You did it with integrity, always doing what you felt in your heart was best. The city is going to be better for it.”

“His love of his hometown has never wavered,” Mrs. Catalina said. “You made Peekskill a proud place to live, work and be entertained. We only have to look around Peekskill to see the tremendous legacy of Frank and his team.”

The newly remarried Catalina wished the new administration well and said he looked forward to “watching from the sidelines.”

“As I close, I leave the incoming elected officials with our record of achievements not to set the bar high, low or even at all. I just wanted to clearly set out what we did with our time here,” he said. “Hopefully, these accomplishments will be surpassed. After all, regardless of politics, we all serve to leave our city a better place than we found it in. By that measure, I think we were successful.”