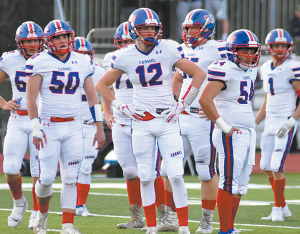 The Carmel Rams will be under new direction this fall with the impending announcement of Jim Nguyen replacing Todd Cayea as Rams grid coach.

So, whether or not we see a single down of high school football played this fall, the Carmel Rams will have a new leader after former Coach Todd Cayea’s silver anniversary season was officially swept under the rug last week, cast aside as if he didn’t win the 2019 Section 1 Class AA Coach of the Year honor whilst leading Carmel to the Section 1 championship game for the first time in 11 years.

“It’s hard to believe they would do this over an argument,” Cayea said. “It was a pleasure to help build that program from shambles to what we made it. We had that program cranking. I’m at peace now, though. It was a hell of a run.”

That’s all water under the bridge now as Carmel administrators are set to officially replace Cayea with his assistant – former offensive coordinator Jimmy Nguyen. And we’re being advised to move on as if Cayea’s service to the Carmel community was a blight on society more than a remarkable career – no fanfare, no pomp and circumstance. It’s just sad on so many levels.

Okay, so I reckon it’s time to move on, since school boards and administrators wield all the power and they tell us sheeples what’s what in these situations. And 99 out of 100 times, the mobs are left powerless.

But, I’ll tell you this as the door slams shut on Cayea’s coaching career at Carmel: nobody meant more to the respect and reputation of the Carmel sports community – a hard-nosed, blue collar district – than Todd Cayea, who exemplified grit, guile and determination while, oftentimes, drawing blood from a stone. Cayea’s 2019 Rams gave state champion New Rochelle its toughest challenge of the postseason for three quarters, doing so behind a senior class that would die trying.

“It’s awful to see Coach Cayea’s career come to a close the way it did, but that certainly doesn’t diminish anything that he’s accomplished in his 25 years of coaching,” All-Section senior Captain Will Boalt said. “He’s made a fraternity of players, past and present, that can talk to each other knowing that Coach Cayea has impacted their lives positively, one way or another, from the late ‘90s to the present 2020.

“So many people fall into the Coach Cayea Era and his philosophies, whether it be his ‘trust-the-process’ mentality or his personal stories that reflect on life. He always has a way of hitting home for each individual and makes you want to work hard for the team and the community at large.”

Cayea deserved a fitting sendoff, one that won’t come to fruition, for this breakup is a Brad-and-Angelina-style split. The beef is real.

Rehashing the situation that led us to this point is an exercise in futility, but blaming former Rams basketball Coach Paul Brennan, with whom Cayea argued with back in November, is patently absurd. Brennan is a truly good man, who bore the brunt of this in more ways than one, so let’s not lie this at his feet. It’s unfair and inaccurate to pin this on Brennan. He doesn’t deserve the ire of Cayea’s disciples.

There are two sides to every story, the one the Carmel Board of Education and Superintendent of Schools Andy Irvin spin behind closed doors while making these secretive personnel decisions that taint Cayea’s legacy. Then, there’s the side Cayea’s people have woven into the fabric that has held the Carmel community together for a quarter century each and every fall while the Rams have, most often, conquered neighboring rival Mahopac on the gridiron in the granddaddy of ’em all.

That should count for something. I’d love to hear the administration’s side; honestly, I’m buying, if that helps. Either way, there is no joy in Mudville.

“Coach Cayea didn’t care about winning or losing,” All-Section senior Captain Alex Beauchesne said. “He cared about how he can make us better people. He was always there for us and taught us valuable lessons that our parents sometimes can’t teach. His legacy in Carmel will always be remembered because all the kids he coached are all better people for it. He is one of the most inspirational people to come through Carmel.”

On the bright side, Coach Nguyen was mentored by Cayea and is said to have many of the qualities needed for success, should he be officially named the next head coach at an upcoming school board meeting as expected.

“Moving forward, I don’t think that anyone can replace Coach Cayea, but I think that if Coach Nguyen gets the position Carmel will remain one of the better football programs in Section 1,” Boalt said. “He holds many of the same values as Coach Cayea and will continue to be a phenomenal coach. He has already made a tremendous impact on the guys this past year.”

Wish Nguyen well when you see him. He’s gonna need it. And make sure to show Coach Cayea some love. He can sure use it right now #Respect…

What coach gets into coaching and secures 13 state titles (an unheard of nine in a row at one point), 30 Section 1 championships and a combined 1,040-208-85 record in two competitive varsity team sports?

Lakeland High School’s Sharon “Sars” Sarsen, the one and only. This is “Life on Sars”: Going 659-73-40 as the Hornets field hockey coach with 13 state titles and 20 sectional crowns while adding a tidy 381-135-45 record and 10 sectional nuggets as the former Lakeland/Panas girls’ lax coach. The numbers are unlike anything in New York sports history, which is why the powers that be finally assembled last week and named her an inductee in the Class of 2020 NYSPHSAA Hall of Fame. It’s perhaps the most overdue honor in state history.

Sarsen gets tired of reading about her vast list of accomplishments and the four Hall of Fame inductions she’s had this year (I’m sure she’s shaking her head as she begrudgingly reads this), because she never takes the credit for anything beyond the guidance and technique she provides her players during a career that spans three decades.

However, the inspirational work ethic she instills, the time, effort and care she gives all students (not just U.S. Olympians like Melissa Gonzalez) within the Lakeland School District as a coach, middle school athletic director and physical education teacher is incomparable and, perhaps, unprecedented, which explains why she is the best coach in the state regardless of sport (period, stop!).

And if there is a God in heaven, Sarsen’s Hornets will be back on the field this fall, with all the other students and the fine families of Section 1, whom I miss tremendously as we trudge through this horrendous pandemic. Stay safe, friends!