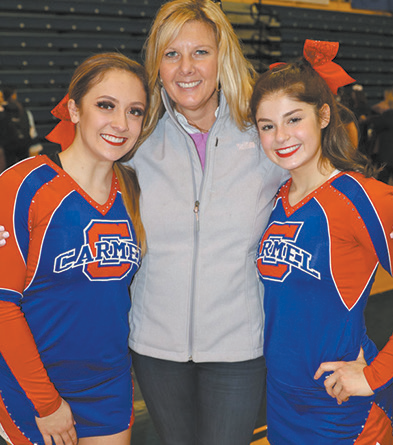 Whether it was the cheerleaders or the football players, former Carmel A.D. Susan Dullea-Reid struck a chord with all Ram athletes.

Man, the Carmel Central School District took a pounding last week, when, on the heels of the official dismissal of former 25-year football Coach Tood Cayea, the Rams are now searching for a new athletic director upon Susan Dullea’s departure for Rye High School last Thursday as the Garnets’ new Director of Health, Physical Education and Athletics.

There is no sugarcoating this loss in Ramland; this is a significant loss at a time when Carmel needed stability. Dullea, who departs Carmel with a heavy heart, is widely regarded as a supreme talent on the Section 1 circuit, one who has supported the districts she’s served — Haldane, Croton-Harmon and Carmel — with a folksy, hands-on approach that makes student athletes feel special while ensuring outstanding educational experiences.

If it seemed like Dullea was everywhere during her time at Carmel, you weren’t imagining it. Dullea is heavily involved at the state and sectional levels, serving as Conference One VP, NYSAAA Chapter One President, Section One Football Chair, and on the NYSPHSAA At Large Committee. She is also a member of the National Interscholastic Athletic Administrators Association. She wore many hats while serving Carmel in a dignified, respectful manner.

“Moving forward is bittersweet,” Dullea said. “I will miss Carmel tremendously… a community with rich tradition and a love for sports, second to none. I will miss so many people, but most especially the kids. I have many fond memories from my first year to the present time. Many days I would drive home with a smile; not necessarily because of a win, but because of a random act of sportsmanship, kindness or citizenship that I witnessed from our kids.”

New York born-and-bred, Dullea has served many masters at Ithaca College, SUNY Potsdam and St. Lawrence University before turning those educational opportunities into a cushy gig at Rye, where expectations and pressure are through the roof, perhaps higher than anywhere in the state.

“Timing is everything,” Dullea said, “and it’s my time to move on to the next chapter. While this is goodbye for now, I will always be a Carmel Ram fan, but I’m also excited to start the next chapter at Rye.”

After nearly five years of shining a bright light on Carmel, Dullea was recently thrust into the Coach Cayea debacle, which, since last November, has been nothing short of an albatross for all parties involved, leading up to last week’s hiring of Jimmy Nguyen as Cayea’s replacement, whom the Cayea’s fully support during this unpolished transitional period.

And now, Coach Cayea’s wife, Debra, is seeking a seat on the Carmel School Board, who’s monthly meetings would draw a must-see-TV-type rating should she win the upcoming election. Man, I want Debra Heitman-Cayea, who hails from Ram royalty (the esteemed Heitman football family), in my foxhole should the poop ever hit the fan #StellarMove…

In Other News: David Zaslaw has good reason for wanting the United States of America to re-open its society and be smart in the war on Covid-19, aka Coronavirus. Zaslaw has built a baseball empire within the Greater Hudson Valley Baseball League, the host association of some 220 summer league teams across the counties of Westchester/Rockland/Putnam/Dutchess and large portions of western CT, not to mention GHVBL’s spring and fall segments of the association, over 700 teams in sum.

According to Zaslaw, the physical and mental well-being of thousands of players is at stake, and his GHVBL is ready to do whatever it takes to get its belated summer campaign up and running by late June, in accordance with CDC and NYS guidelines.

“We have been cooped up so long, we need to start America again,” Zaslaw said while simultaneously announcing a mandatory coaches meeting for mid-June in an effort to jump-start the process. “We are hoping and planning for a summer season. We are ready to start as soon as our local government allows us to, and I sincerely hope schools and towns allow us onto the fields immediately. The kids need recreation for their physical and mental health.”

Frustrated at the state’s treatment for baseball, or, “the lack of consideration” by state officials, Zaslaw asserts that baseball (and softball for that matter) is, by design, a different animal. The GHVBL is ready to mandate the necessary changes to ensure additional welfare against the spread of Covid-19.

“Maybe not the same as golf and tennis, but a significant portion of the game is, by design, socially distanced,” said Zaslaw, a resident of Yorktown. “We are happy to implement additional rules and regulations to promote safety measures, including no handshakes, no chewing gum or spitting, sanitizing baseballs each half inning, social distancing in and around dugouts, whatever it takes!”

Zaslaw is closely monitoring the efforts in New Jersey where the USABL is a large youth travel league that has the resources to devote to moving baseball up in the queue in NJ.

“A successful effort there in New Jersey will help us in New York and Connecticut,” Zaslaw said. “As of now, we are hoping to hold a scheduling meeting in mid-June, utilizing social distancing guidelines & smaller groups, and at that meeting we are hoping coaches will have dates for state and local guidance for baseball start dates. Hoping late June early July for a start in NY and CT.

Pennsylvania has allowed teams to begin to practice already, but recreation is, for now, in Phase 4 of the NY Pause.

“Unfortunately, there are lots of efforts to lobby lawmakers to keep companies and organizations whole during the pandemic,” Zaslaw said, “but there’s little consideration for getting kids back on the fields to play. That is our interest and focus.”

If empirical data is on our side, and sunlight and fresh air help deter the spread of this heinous virus, then perhaps Zaslaw, children and parents across the globe will soon hear umpires on diamonds roar, “Play Ball!”…

In the meantime, I have no cold, hard evidence (other than the pics I see on Insta/Snap) or any insider knowledge on this situation (other than what many friends have reported), but I know for a fact that we’d best figure out a way to get our kids back on ballfields ASAP because the amount of underage drinking I’m hearing about is absolutely chilling. Hell, the amount of alcohol/drug abuse (period!) during this pandemic has been insane #Facts…

Golf, NHL playoff hockey, tennis and lacrosse are slated to begin in the days ahead and Major League Baseball is inching closer to an abbreviated season, so we are one step closer each day to ending the Netflix-style bingeing that has defined many since March 11th, the day sports stood still. Yes, I deplorably loved me some sassy Ruthy Langmore and Darlene Snell on Ozark, but this warped perception of ‘new normal’ needs to end #BringBackSports. There is light at the end of the tunnel, gang, and let’s just pray it’s not a lit torch in the form of an oncoming second wave following these senseless riots across the country, so we can get back into our healthy sports routines and some form of rational behavior. Justice for George Floyd (yes, 100 percent!!!), but these street terrorists must be confronted and stopped.…

The NYSPHSAA Executive Committee recently approved Middletown High School as the host of the boys’ NYS soccer championships from 2021-2023, and this is just great news. Middletown is the perfect spot when you consider the powers that be in NYS soccer. Section 5 (Rochester/Buff area) may not be big fans of this announcement, but Middletown is fairly central to Syracuse/Oneonta/Binghamton regions, plus Long Island, Hudson Valley and Albany/ADK programs. Count me in!