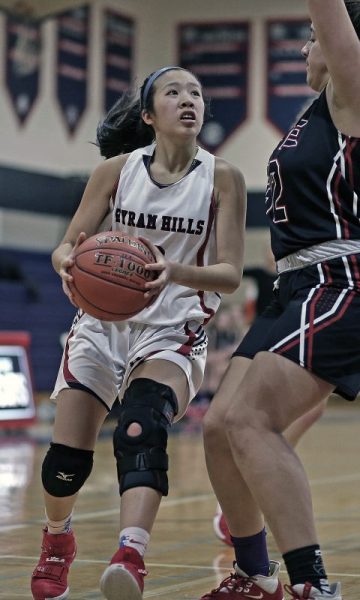 Jen Mui of Byram Hills drives to the basket against
the visiting Rye Garnets.

It’s very crowded at the top of Class A girls’ basketball in Section One this season and two of the teams with their sights set on a sectional title, Byram Hills and Rye, provided an early glimpse on Friday night of just how competitive the playoffs could be in a couple of weeks.

The Bobcats and Garnets, both 12-3 at the start of the evening, were tied with less than two and a half minutes remaining before a 10-2 run to close the game lifted visiting Rye to a 62-54 victory in a key league matchup. Despite 17 points from guard Jen Mui and 13 from forward Stefana Latella, Byram Hills lost for just the second time in its last nine games.

“I’m definitely very proud of what our team did tonight,” said Bobcats head coach Tara Ryan afterwards, even though a comeback bid from a 10-point deficit after three quarters fell a bit short. “That’s the type of effort we want to see from them. Rye has a fantastic crew and I think we played very well against them.”

Byram Hills managed to trade early baskets with the Garnets in the opening moments of the first quarter and tied the game for a third time on a layup by Sophia Villani with 2:27 remaining in the fourth. But Rye never trailed all night, building an eight-point lead three minutes into the second period and then a 10-point cushion three minutes into the third quarter.

Led by the inside-outside duo of Amanda Latkany and Teaghan Flaherty, who wound up combining for 40 points, the Garnets began the fourth quarter with a 48-38 cushion. But the Bobcats rose to the challenge, outscoring Rye 14-4 over the first five and a half minutes of the final period to tie the contest.

Unfortunately for Byram, Latkany answered with a short jumper with just under two minutes remaining that gave Rye the lead for good. The Garnets sealed the outcome by making seven free throws over the final 41 seconds, four of them by Flaherty. The Bobcats’ only points over the final couple of minutes came on a pair of free throws by Villani with 27 seconds left that cut the Rye lead to 58-54.

“We did really well at moments,” said Ryan. “We’ve got to work on our execution at other times, but that’s how basketball games go. Ups and downs. I think it’s fair enough to say our team had a little bit of jitters. It’s a big game. It could possibly be a preview of a Class A final or somewhere down the line. We haven’t had a game of this magnitude yet this season and I’m really happy about how we performed and were able to push through when we were down.”

The Bobcats, who had rolled to home wins over Dobbs Ferry and Eastchester earlier in the week, found themselves trailing Rye 14-6 late in the first quarter before Mui provided a conventional 3-point play on a drive from the right baseline with 7.4 seconds left. Two baskets by Latella, sandwiched around a short jumper from eighth-grader Grace Corelli, cut the Garnets’ lead to just 16-15 early in the second quarter.

A 3-pointer by Flaherty with five minutes left in the half capped a 7-0 Rye spurt that opened up an eight-point margin. But by halftime, the Bobcats had closed again to within 29-26. Villani’s layup 12 seconds into the second half moved Byram to within one point before Rye went on an 11-2 burst, capped by Flaherty’s left-corner trey, to build its first double-digit lead.

Byram Hills got a driving basket from Mui, then a pair of free throws by both Beth Corelli and Mui, to narrow the Rye advantage to 42-38. But the third quarter ended with six straight points by the Garnets and the Bobcats started the fourth again down by double digits.

Olivia Picca provided a 3-pointer from the right elbow with 5:40 left and a put-back bucket with 3:05 to go, helping the Bobcats go on the 14-4 burst that tied the game with less than two and a half minutes remaining. But Byram never got another basket after Villani’s layup while falling to the court tied the score at 52 apiece.

“It’s always a great rivalry with Rye,” Ryan said. “So can’t wait to see them later on and what the playoffs bring. I would love to see them at the County Center. I think that would be a great Class A basketball game.”

Friday night’s showdown might have already proved that, and Ryan figures her Bobcats have just as good a chance as anyone to be running up and down the famed court in White Plains in a few weeks.

“I think it’ll be really great in Class A this year,” she said. “It’s a very unique year where, if you look, everybody is doing fantastic. Everybody is probably going to finish with 12 wins or more and it’s anybody’s ballgame. So that’s what we keep putting in the minds of our kids. This could be our year.”