Skip to content
Community Announcements
November 11, 2022 Rick Pezzullo
We are part of The Trust Project

Central Turf & Irrigation Supply, headquartered in Elmsford, is a family business owned and operated by Bernardo Luciano. His daughter Camilla Sorvillo approached the Greenburgh Supervisor’s office recently about a vision her father has of serving up to 1,000 meals this Thanksgiving Day to Greenburgh residents most in need. He and his company do various large-scale philanthropic acts several times a year, but distributing warm Thanksgiving meals is something he would now like to make an ongoing tradition.

The Greenburgh Neighborhood Health Center will generously open their space on Knollwood Road to this large event on Thanksgiving Day.

The Greenburgh Health Center, a site of the Mount Vernon Neighborhood Health Center, Inc., is a 501 (c)(3) non-profit organization that offers high quality primary, preventive, and affordable health care and support services in an atmosphere of humane care, dignity and respect to improve the health and lives of adults, teens, and children in Westchester County and the Bronx.

Bernardo Luciano emigrated by himself to the U.S. from Italy in 1970 at the age of 15. Once here, Bernardo began working in restaurants, supermarkets, and drove a taxi at night before landing a job as a landscape contractor. That started his lifelong career in the Green Industry. During his first few years on the job, he became intrigued by irrigation and its ability to create beautiful landscapes. Embracing his inner entrepreneur, Bernardo was determined to get into the irrigation business. And, he did just that. Bernardo left his job with the landscaping company and went to work for an irrigation contractor. After a few years as an employee, he became a partner in the business. Five years after that, he was ready to go out on his own, starting his own successful irrigation contracting business in Elmsford.

After selling his business in 1995, Bernardo purchased Central Irrigation Supply. With the help of his devoted wife Filomena, daughter Camilla, and son Anthony, Bernardo grew Central from one location in Connecticut to the largest family-owned and operated landscape supply company in North America—with more than 58 locations throughout the U.S. and Canada and with 300 employees. The headquarters has been in Elmsford since around 2002.

One-thousand warm Thanksgiving dinners – ordered from local fine grocer and another family business DeCicco & Sons – will be served by volunteers including members of Central Turf & Irrigation along with John DeCicco Sr. at the Greenburgh Health Center on 295 Knollwood Road on Thursday, November 24 from 11:30 a.m. to 1:30 p.m.

Assistance of local groups who serve the needy, like churches and shelters, is sought to determine how many meals might be needed for those communities. With advance notice, the meals can be packaged for take-out to be distributed. 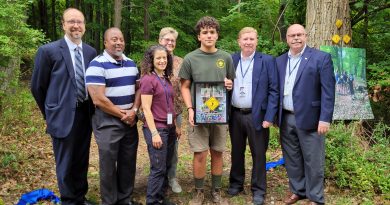