Politics The Northern Westchester Examiner
March 9, 2022May 4, 2022 Rick Pezzullo Buchanan
We are part of The Trust Project

The mayoral seat and two trustees’ positions are up for grabs in the Village of Buchanan March 15 election.

Knickerbocker, who served five years as trustee before being elected mayor in 2014, said she has effectively led the village through the most trying time in its history—the closure of the Indian Point nuclear power plants, Buchanan’s largest employer and revenue generator.

“Experience matters now,” Knickerbocker said. “The next several years is a critical time for the Village of Buchanan. We still face many challenges as we look to reinvent ourselves after the closure of our largest taxpayer and employer. I want to finish the work I’ve started.”

She said the accomplishment she is most proud of is the passage of state legislation that taxed the spent fuel rod casks at Indian Point, the first such arrangement in the nation.

“The idea came to me because I have been working with other nuclear communities facing the same issue with the spent fuel,” Knickerbocker explained. “We have been working hard since the announcement of Jan. 2017 (that the plants would close) to get the village through this.”

Murray served as mayor in Buchanan from 2010 to 2014. He was a trustee the two years prior and was returned to the board last year. He is also a former chairman of the village’s Planning Board.

“People just want to see a change,” Murray said. “The reason I got out of politics in 2014 is I thought I was a bit stale. I was out of good ideas. They’re not coming up with fresh ideas. She’s (Knickerbocker) been a lot more reactive than proactive. I don’t feel that she accepts input. She doesn’t like other people’s suggestions. I really don’t know what she’s thinking. You can’t operate in a vacuum.”

Murray has worked at Indian Point for 32 years and is one of about 300 employees who was retained by Holtec International during the decommissioning of the plants.

Last year, Knickerbocker wrote a letter to the Westchester County Board of Ethics seeking an advisory opinion on whether it was a conflict of interest for Murray to negotiate with Holtec. On February 18, the Board of Ethics, which has no enforcement authority, concluded Murray must recuse himself from any discussions, deliberations or votes involving Holtec.

“It wasn’t political. It wasn’t personal. People were asking me about it,” Knickerbocker said.

“I don’t feel there is a conflict,” Murray insisted, noting as Planning Board chairman he reviewed and approved plans from Holtec for a project involving a spent fuel pad without any public backlash. “To think I would do something against my values and against the people I represent is somewhat strange.”

Besides ongoing issues with Holtec, Knickerbocker, who emphasized the village has received more than $8 million in grants the last few years, is looking for “smart development opportunities” to increase the village’s tax base and upgrade the village’s sewage treatment plant.

Murray said the village has been too slow in returning to in-person meetings and has wasted too much money on outside consultants for work that could have been done in-house.

In the race for two trustee seats, 12-year incumbents Richard Funchion and Nicholas Zachary are running on the same ticket as Knickerbocker, while political newcomers Steve Laker and Dan Stewart are Murray’s running mates.

Funchion is a 45-year resident of Buchanan and retired U.S. customs agent. He is a survivor of the September 11, 2001 terrorist attacks at the World Trade Center. (He did not respond to questions posed by Examiner Media).

Zachary has lived in the village for more than 30 years and is a part-time site supervisor for an architectural woodworking company, a field he has worked in for 35 years. He served on the village’s Zoning Board for 10 years before being elected as a trustee.

“I want to be part of bringing Buchanan to a new reinvented and reinvigorated level,” he said. “We’ve always been a great community before but lots of young families are coming in and there are exciting possibilities. Right now, we need smart development to help restore some of our tax base and we need to keep doing little things with our streetscapes and our recreation program to make this an even more desirable place to live. We have worked hard to provide the highest level of services in the area while keeping our budget as lean as possible.”

Laker grew up in Montrose and has lived in Buchanan for the last 16 years. He said he has served in CEO & CFO roles within the retail energy, financial and construction industries. He has served as treasurer for many years for both the Cortlandt National Little League and the Our Lady of Mt Carmel Society.

“First and foremost, I am running for trustee of the Village of Buchanan because I love the village,” he said. “The village offers impeccable first-class services – from sanitation, public works, recreation and police. I would like to utilize my business expertise and experience to ensure that during these challenging times those services are maintained and even improved upon by encouraging sensible development and preserving fiscal responsibility.”

“Obviously the most pressing issue is the recent closure of Indian Point and its effect on property taxes – both the increase to homeowners as well as the decrease of revenue for the village,” he added. “Included with that is the rezoning and potential redevelopment of the Indian Point property. I believe my business acumen, leadership and management will be valuable in guiding the future of the village.”

Stewart is a lifelong resident of Buchanan and a licensed insurance broker and manager of Personal Lines Insurance Department.

“I am concerned about the future of our village with the closure of Indian Point. I have a deep connection and affection for our community and I can make a difference. I am a great listener and view myself as a problem solver,” he stated. “The most pressing issues facing our village are entering into an IMA with the Town of Cortlandt by June for our sewer treatment plant; negotiating a new PILOT Agreement with Holtec; as well as modifying our zoning laws to be more inclusive so we can attract more commercial businesses. I look forward to the challenge and would love to serve my community. 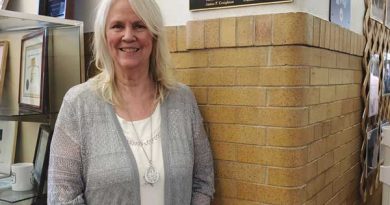 Cortlandt Town Hall to be Named in Honor of Linda Puglisi