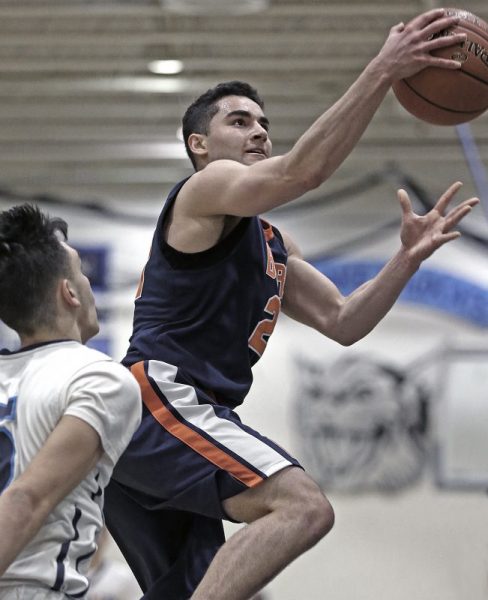 Briarcliff’s AJ Panarese takes the ball to the basket in the Bears’ win at Westlake.

On a night when shooting percentages were low, scoring averages dipped and getting stops was all the rage, it was the Briarcliff Bears who earned the highest grades for defensive tenacity.

Holding Westlake to a mere 10 points in the first half and then going on a 12-0 third-quarter run, the Bears came away with a convincing 42-28 victory on Friday, avenging their loss at the buzzer to the Wildcats nearly a month ago and spoiling the host’s Senior Night.

“You know, it’s kind of a multiplier effect,” said Bears head coach Nick Friedman after watching his team throttle the Wildcats. “When our defense is right, we’re confident offensively. And defensively, it doesn’t just mean them not scoring. It means us really playing the way that we’re capable of.”

Aidan Murnane scored 15 points for the Bears, while Elliot Jones and Jayden Larregue provided eight apiece in a game where baskets were extremely hard to come by. With Westlake starting all five of its seniors instead of the normal unit, Briarcliff took advantage and scored the first nine points. The Bears never trailed all evening and built a lead as large as 16 points with two minutes remaining in the third quarter.

“It definitely hurt us to start, but there were so many more facets to the game,” said Westlake coach Chad Charney about the improvised starting lineup that fell behind 5-0 in the opening minutes. “We didn’t put the ball in the basket. We had a slow start offensively, but everything tonight was slow on offense.”

Westlake junior guard Carter Falkenberg entered the game three minutes in after five quick points from Murnane had staked the Bears to an early lead. By the time Falkenberg, who finished with a game-high 16 points, finally got the Wildcats on the board with an inside bucket with 1:40 to go in the first quarter, the Briarcliff lead was 9-0.

“I don’t think that set us back too, too much,” said Charney after seeing his seniors struggle out of the gate. “I mean, obviously Falkenberg off the floor to start the game, that definitely didn’t help considering he’s been our leading scorer all year.”

It was Falkenberg who had dashed the length of the court to score the winning basket as time expired in Westlake’s two-point win over the Bears on the road in early January. This time, though, the Bears built a 12-3 advantage after eight minutes and managed to overcome a big scoring drought in the second quarter on the way to improving to 8-9 this season.

Unable to score, Briarcliff saw its nine-point lead after one quarter get whittled down to just two points on a Falkenberg basket with 3:40 left in the half. Murnane finally ended the long Bear drought when he scored on a runner from right of the lane just before the buzzer sounded to end the half. Murnane’s late basket gave Briarcliff a 14-10 lead at the break and left the Wildcats’ Charney disappointed.

“There was a timeout with under a minute,” he said. “We flubbed that one because we had a foul to give. We were supposed to foul the kid, make it even tougher, and maybe shut ‘em out for the whole quarter. Yeah, we flubbed that one up. It happens, but you’ve got to hope it doesn’t happen in the next game, in the playoffs.”

The Bears’ Jones and the Wildcats’ Falkenberg traded corner 3-pointers a couple of minutes into the second half before Briarcliff went on its 12-0 burst that broke the game open. A lefty layup by Falkenberg with 1:44 left in the third quarter ended the run, but a layup at the other end by Jones with 13 seconds to go gave Briarcliff a 33-17 cushion heading to the final period.

The fourth quarter began with five straight points from Westlake as Matt Martin connected on a jumper, Falkenberg hit a free throw and then passed to Brendan Di Liberti for a layup. But over the top of the Wildcat press, Jones scored on a layup and Murnane followed with a fast-break scoop to the hoop. With 3:45 remaining, the Bears’ lead was 37-22.

The Wildcats’ Matt Pierro knocked down a 3-pointer with 1:10 left, cutting the Briarcliff lead to nine, but four free throws in the final minute by Larregue sealed the outcome for the Bears, who came back 24 hours later to defeat Saunders and reach the .500 level.

The Wildcats, meanwhile, now turn their attention to the sectional playoffs after their most successful regular season in nearly a quarter century.

“Yeah, that’s a big accomplishment, 14 wins,” said Charney. “We’ve had a great season, but obviously we wanted this one on Senior Night, at home, and we already beat ‘em one time before. So it was tough.”