Skip to content
Government The Examiner
December 31, 2020February 24, 2022 Martin Wilbur Briarcliff
We are part of The Trust Project

Five Briarcliff Manor business campuses have been rezoned to encourage more varied use of the properties that officials hope will spur greater investment in the community but without including residential uses for the sites.

On Dec. 15, the Village Board revised its zoning from Business (B) to Complementary Transitional (CT) for the parcels at 345 Scarborough Rd., the former Philips Research campus, 600 Albany Post Rd., 320 Old Briarcliff Rd., 555 Pleasantville Rd. and 333 Albany Post Rd. There had been a moratorium in place for the last year-and-a-half at the sites to allow for the board to make its zoning decision.

Mayor Steven Vescio said because only 6 percent of Briarcliff’s tax base is commercial, one of the lowest percentages in Westchester County, the goal was to prevent the loss of commercial properties. Another goal was to increase business districts that add vitality to the community.

Furthermore, the village wanted to avoid overburdening various services that are typically associated with residential developments, particularly the Ossining School District, Vescio said. Four of the five properties are zoned for Ossining schools, which are already stretched thin, while only the Pleasantville Road parcel is in the Briarcliff School District.

However, a New Jersey-based developer that bought the 94-acre Philips site in 2017, by far the largest of the five parcels, and has plans for a 180-unit age-restricted townhouse community criticized the village not just for its zoning decision but its refusal to sit down with him and his representatives to consider what his team could offer Briarcliff Manor.

Jonathan Grebow, president and CEO of Ridgewood Real Estate Partners whose company reportedly bought the property for $12.2 million, said at a time when many corporate campuses in the region are empty and the demand for housing in the suburbs is exploding, it’s frustrating and bewildering why the village wouldn’t at least listen to his proposal.

No formal application was submitted because of the moratorium, Grebow said.

Elsewhere in Westchester, towns are clamoring for residential communities for adults 55 and up with amenities, including a proposal his company is pursuing in Greenburgh, he said.

“We had approached the village and our initial impressions that residential uses was a better use for the property, and an active adult community is usually welcomed with open arms because it generates tax revenue, it has no school-age children, it’s a less impactful use.”

Projections by Ridgewood Real Estate Partners pegged the total revenue to all taxing entities at $3,232,117, including just over $2.3 million going to the Ossining School District. Grebow said he would commit to not having any school-age children live in the community.

But Vescio said it’s not how much tax revenue is generated a but what a community nets after the cost of services associated with a residential plan are factored in that counts.

Plus, the village will be able to more effectively monitor development because special permits will now be required, said Briarcliff Manor’s planning consultant Patrick Cleary.

Vescio pointed to the tax incentives the village is offering as an attraction. Any of the property owners investing at least $50,000 in one of these commercial properties will only pay the village half of the additional taxes the first year. The balance would be phased in over a 10-year period.

While the mayor acknowledged that it will take time to entice tenants, there will be changes in a post-pandemic economy, including companies that may have satellite offices in the suburbs closer to more of their employees’ homes.

“I think the tenants are out there but none of these properties are under village ownership,” Vescio said. “So, it’s really up to the owners to try and do their best to market it and offer it for rent at a reasonable price. If you’re asking $100 a foot, you’re not going to get anybody, but if you’re asking (for) a more reasonable number, you’ll probably get somebody tomorrow.”

But Grebow said his company’s proposal would provide the tax revenue that communities like Briarcliff need. Plus, there would be less traffic on Scarborough Road than what the village is looking to do. A development that includes medical or professional offices would significantly overstress the road, while his preliminary traffic studies point to 36 additional vehicles generated for the morning peak and 47 for the afternoon peak.

Grebow mentioned he is weighing legal options against the village but wasn’t prepared to discuss that matter further. 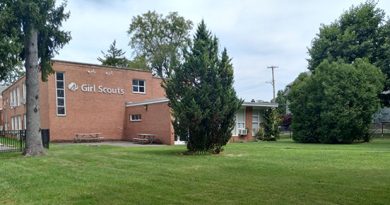