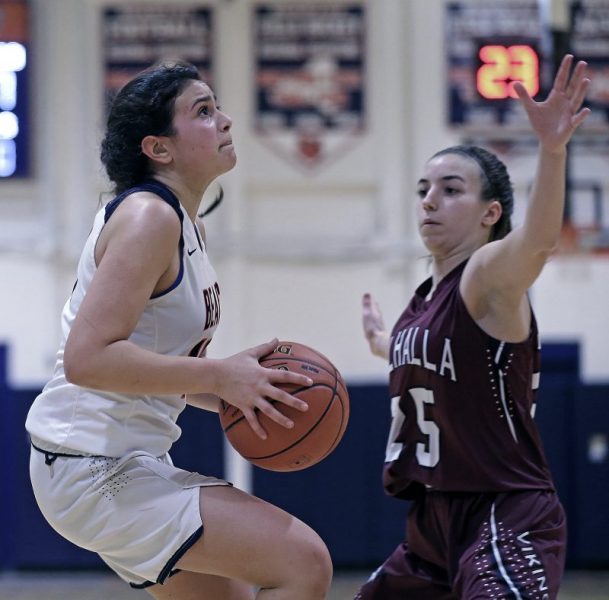 Not even the absence of his best player could prevent Briarcliff girls’ basketball coach Don Hamlin from reaching a lofty milestone last Tuesday afternoon.

With leading scorer Alana Lombardi sidelined by a recent ankle injury, the Bears still managed to defeat the visiting Valhalla Vikings 43-35 to remain unbeaten this season and enable Hamlin to collect the 400th victory of his coaching career.

“I never think about personal stuff,” said Hamlin shortly after watching his shorthanded team hang on to beat the Vikings. “It’s really nice, but it means I’ve been here a long time and I’ve had some great players.”

Junior center Jordan Smith provided the Bears with 16 points, 12 rebounds and eight steals, while Cat Carrafiello added 13 points. Valhalla, 5-9 with the loss, was led by Shelby Sekinski and Lauren Alley with 12 points apiece.

Asked afterwards how difficult it would have been to get to 400 wins if he always had to coach without his best player in the lineup, Hamlin wasted no time answering.

“Oh, it would’ve been impossible,” he said. “We’ve certainly had our fair share of injuries. I think there was a seven-year or eight-year stretch where our top scorer was injured, and significantly injured. The kids that were next up did a good job, like today. They did a great job today.”

Lombardi twisted her right ankle driving through the lane 30 seconds into the fourth quarter of the Bears’ narrow win over Croton just four days earlier. Without her on the floor, Briarcliff is a bit less imposing for opponents.

“It makes everything a little more difficult,” said Hamlin. “Everybody looks at Alana’s scoring, but she also has, like, six or seven steals a game, 10 rebounds a game. Her presence gets other people open. It’s a whole big difference in kind of everything we do.”

With Alley sparking Valhalla by connecting on a trio of 3-point shots, the teams were tied at 10 apiece after the first quarter. But the Vikings outscored the Bears 11-5 over the first three minutes of the second quarter to open up a six-point lead. Briarcliff answered with a 17-footer from Kaitlyn Ryan, a 3-ball from Carrafiello from the right elbow and a fast-break layup by Smith before a bucket by Allison Langlois gave the Vikings a one-point edge with 2:50 left in the half.

Alley’s fourth 3-pointer of the opening half with 36 seconds remaining provided Valhalla with a 26-25 lead. But Carrafiello, in the starting lineup due to Lombardi’s injury, drained another 3-point shot with 14 seconds on the clock and the Bears took a 28-26 lead at the break.

“Yeah, she’s done that all year,” said Hamlin about the contribution he got from Carrafiello, just a freshman. “She’s been a great addition off the bench. She’s a scorer, so she comes in and gives us a lift.”

Two inside baskets by Smith in the first 90 seconds of the third quarter stretched the Briarcliff lead to six points. The Vikings closed to within 32-29 on an 18-foot jumper by Sekinski, who became the school’s all-time leading scorer a few days later. But Smith added two more buckets and Dylan Zednick provided a put-back with 1:17 left in the third quarter, enabling the Bears to take a 38-31 lead into the fourth.

Both teams struggled mightily to score in the final period. Briarcliff finally got a pair of free throws by Julia Dallessandro exactly three minutes in and Valhalla ended its drought with two Sekinsky foul shots a minute later. A short lefty pop near the foul line by Sophie Sproul moved the Vikings within 40-35 with 2:17 left in the game.

But Valhalla could get no closer and a basket by Carrafiello with 1:49 remaining all but sealed the outcome. The Vikings went scoreless the rest of the way after the bucket by Sproul and dropped their fifth straight game.

“All in all, it was a good effort by our girls,” said Vikings coach Stephen Boyer. “They played very hard. They played very well defensively. We have trouble scoring, but I thought we did a decent job and took away their main weapon, which was the big girl in the middle (Smith). We just kind of struggle at times when teams take away Shelby. It’s tough for us to have a consistent second or third scorer, and that’s the issue.”

After the final buzzer, the Bears, currently 16-0 this season, presented Hamlin with a trophy honoring his milestone victory and posed for photos. If his players were feeling any pressure trying to get the win for him, Hamlin wasn’t aware of it.

“I don’t know,” he said. “We didn’t talk about it. It’s kind of embarrassing to tell you the truth, so we never talked about it. I didn’t know if they were aware of it or not. Didn’t bring it up in practice or before the game.”

Boyer has known Hamlin a long time and wasn’t that upset to be the victim on his special day.

“Don coached football for me 35 years ago,” he said. “It’s a great achievement and he’s done a great job with this program.”

For Hamlin, the significance of his 400 wins is secondary to some intangibles along the way.

“Coaches, we don’t score baskets,” he said. “We don’t grab a rebound. We just try to help kids out, and we were successful doing that a few times.”