Education The Putnam Examiner
September 30, 2022October 4, 2022 Rick Pezzullo Brewster
We are part of The Trust Project

When Madison Dakin stepped onto the turf at MetLife Stadium last month, the Brewster senior had to take a few deep breaths and remind herself that this wasn’t a dream. Dakin and her teammates on Brewster’s first-ever girls flag football team had put together a stellar inaugural campaign against other Section I teams this year, but this night was something different entirely; they were getting a chance to showcase their skills in front of a stadium full of fans during halftime of an NFL preseason game.

For eight minutes during the New York Giants’ tilt with the Cincinnati Bengals, the girls from Brewster took the field against Section 4 champion Binghamton High School, giving spectators an opportunity to watch two of the premiere high school girls flag football teams in the state take the same field as their NFL heroes.

“I was definitely nervous at the beginning, but then you get into a groove and you just start to focus on your game,” said Dakin. “It honestly, I felt like I was dreaming for most of it because being able to walk out onto that field, I felt like we had grown so much and accomplished so much in a short amount of time.”

2022 saw the launch of girls flag football in the state, as the New York State Public High School Athletic Association partnered with the New York Giants, New York Jets and Buffalo Bills to pilot a program that saw 41 schools form teams for interscholastic competition. Brewster was one of nine Section 1 schools to field a squad this spring and posted a perfect 11-0 record to emerge as the top team in the area.

The Bears’ stellar campaign caught the eye of the Giants, who reached out to Brewster Athletic Director Dean Berardo in June to see if the Bears would be interested in participating in an eight-minute exhibition against Binghamton during half-time of the Giants’ Aug. 22 preseason game.

“They were ecstatic and so appreciative of the opportunity,” said Cunningham. “They were on board right away.”

Brewster senior Bre Washington — an avid NFL fan who played tackle football as a youth—said that getting the opportunity to set foot on an NFL field was an affirmation that she and her teammates were making a difference and changing the landscape of high school athletics.

“I’ve been to so many games, I’ve seen the Jets and the Giants so many times, but I had never been on the field,” she said. “Just being on the field was such a cool experience because we weren’t just a team, we made history.”

Brewster’s flag football team had 16 players on the roster during the  Spring season, but the team’s three seniors—who graduated in June—were not allowed to compete in the exhibition game, as per NYSPHSAA rules. However, Cunningham and his assistant, Mike Castaldo, were able to enlist the graduated seniors’ help as coaches, ensuring that they were able to participate in the historic night for the fledgling program.

“It was definitely disappointing that they weren’t able to play since they had been such a huge part of our success this spring,” said Cunningham. “But they’re all great kids and they embraced their roles.”

Dakin lauded the Giants’ organization for the invitation and its efforts to grow flag football in New York State. Dakin said she hopes that the Brewster team’s 11-0 season—and its spotlight game at MetLife Stadium—will draw attention to the sport and help the program continue to grow.

In recognition of his efforts, The New York Giants and Gatorade selected Cuningham as the Lou Rettino High School Coach of the Week for Week 2 of the 2022 season. Brewster High School will receive a $2,000 check granted to the school’s flag football program. Coach Cunningham will also receive a certificate of recognition signed by Giants head coach Brian Daboll and will be honored at a dinner after the season, as well as a 2023 pre-season home game.

“It’s so cool to know we have that support, and you can tell that there’s been a lot of buzz in Brewster,” Dakin said. “This meant more than just playing the sport; it’s empowering to know that we were the first girls to be a part of it and we’re starting something for the future.

“We get to be role models,” she added. “And it felt great to represent my school and be a part of the next generation of sports for girls.” 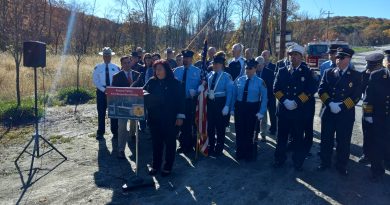