Sherlock Holmes is known for his uncanny ability to gather evidence based on his honed skills of observation and deductive reasoning. Patience was also something the fictional detective needed to solve cases — a virtue that Brewster author Joseph DeSantis seemingly possesses as well, based on the perseverance he showed in getting a publisher interested in his first novel. 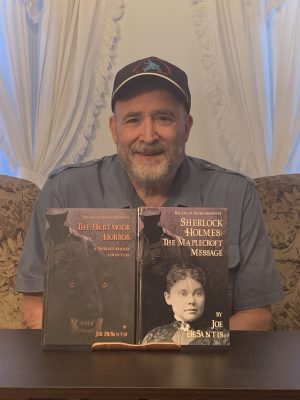 DeSantis, a retired parks superintendent in Westchester County and White Plains, started writing the Holmes-inspired mystery The Dartmoor Horror, which is a continuation of the original AC Doyle Hound of the Baskervilles story, in 2005.

He said he was rejected from at least 75 publishers before Belanger Books, which specializes in mysteries and furthering the Holmes genre, gave him the break he longed for.

“I’ve been trying to get something published for 13 years,” DeSantis said. “I sent it to them as a lark and this young guy got back to me. It was really a strange feeling to finally have someone accept it and have it well-received.”

That first novel was published last summer, and DeSantis followed it up this summer with The Maplecroft Message, a tale that involves Holmes and his sidekick, John Watson, vacationing in America when they receive a frantic message from Lizzie Borden asking for their help when she is accused of a murder.

Borden was accused in the 1890s of axe murdering her stepmother and stepfather. “It was like the O.J. trial of the 19th Century,” DeSantis said.

“It takes place a year after she is acquitted of those two murders,” DeSantis explained of his latest novel. “I thought how interesting it would be if Sherlock Holmes met Lizzie Borden.”

DeSantis said of Holmes “he continues to fascinate people.”

“He’s very focused, calculated. He doesn’t let emotion get in the way of the facts,” DeSantis said. “He just looks at the facts and lets them go wherever they lead him.”

DeSantis, who also has three supernatural, historical fiction self-published books, said his mission in trying to be an author was never about making money.

“Just finding a publisher to validate my work was enough for me,” he stressed.

Not resting on his laurels, DeSantis said his third novel, The Glamis Castle Murders, is 95% completed and is expected to be published next summer.

DeSantis’ books can be found on Amazon or belangerbooks.com.