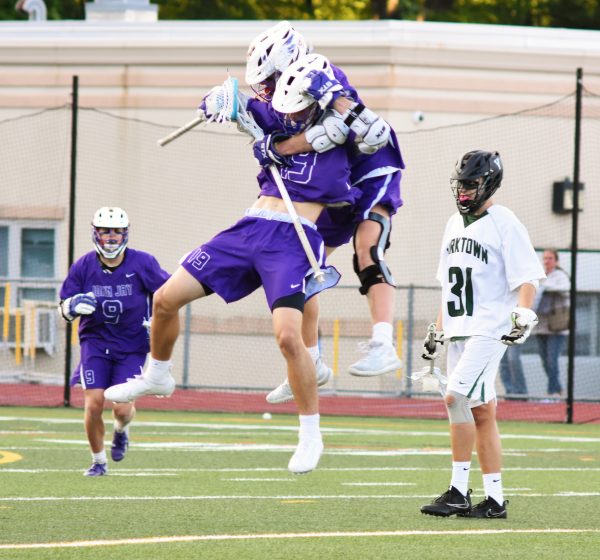 John Jay celebrated its 2nd title in as many years, defeating Yorktown, 7-6.

Well, history was made last week on the Section 1 lax circuit, and not the kind of history the folks in Class B Yorktown High and Class A Lakeland/Panas are accustomed to or prone to liking.

Yorktown suffered consecutive championship setbacks for the first time since 1976 (losses to Walter Panas & White Plains) when Alex DeBenedictis’ lefty crank from 15 yards out slipped past the keeper but chimed the pipes with less than 10 seconds left, and by the time the top-seeded Huskers chased down the loose ball near midfield, the second-seeded Indians were spilling out onto the field, celebrating Jay’s nerve-wracking 7-6 title triumph in the Section 1 Class B championship last Friday night at Lakeland High School.

The night before, it was host Lakeland/Panas who failed to score a single second-half goal in the 7th-seeded Rebels’ 10-4 Class A title loss to top-seeded Mamaroneck. Neither the Huskers or Rebels were on top of things in the second half of each loss, both allowing their opponents to have their way.

Flags were flying at half-mast in some portions of Yorktown over the Memorial Day weekend, which the Cornhusker lacrosse family would rather forget. The state-ranked (No.3) Huskers (13-6) were rolling along with a 5-2 lead on (No.5) John Jay (17-2) shortly before the half when Reese Andrews extended the lead to three goals with 35 seconds left in the half, but Jay M Bryce Ford scored in transition just before the buzzer to give the Indians a lift at the break. Jay Coach Tim Schurr told his boys to play fast and loose, which they did right up until Tyler Wishart scored two of the game’s last four goals, including the game winner. Wishart, one of the top lax/ice hockey prospects in the state, brought the Indians within a goal, turning a Tommy Feinstein outlet into a goal with 6:45 to go in the third quarter. Jay M Dean Ford, who sat out the first matchup between the two juggernauts (a five-goal Yorktown win), set up Max Kesicki, for a 5-5 tie to open the fourth-quarter scoring. Husker M Keegan Doller (1A) answered with his third of the game, but Jay M Charlie Murphy tied the game at 6-all with 4:22 to play. Just 24 seconds later Luke Mercer (2G, 2A) found Wishart for the game-winner.

Yorktown’s Shane Dahlke had one goal and one assist while Tim O’Callaghan and Reese Andrews each scored once. Husker G Dan O’Meara made nine saves and was under constant pressure in the second half with the Huskers failing to take care of the ball in a manner few had ever seen before.

“We have a small team but we’ve had fun all year and we didn’t want it to end and to beat the best program in the history of Section 1 is just great,” Coach Schurr said. “We don’t have one defender on this team who will play college ball, but you see what they do together, because they’re a team. It’s spectacular.

“We do like to ride hard,” he added. “I don’t know how we forced so many turnovers but we got some. Normally they clear better against us, but our guys were putting a lot of pressure on the ball. We just put together a hell of a second half.”

It was a confounding second half; one that had the local sports media wondering what the heck they were witnessing as the Huskers uncharacteristically coughed the ball up time and time again.

“We definitely were careless with the ball,” Yorktown Coach Sean Carney said. “Too many unforced turnovers hurt us in the second half. There was a spurt there where we could have clamped down and taken control for good but the game became too frantic and turnover heavy for both teams.
“Their seniors really grabbed the game late,” Carney added. “Misplays on our defensive end hurt, and we hit three or four pipes as well, which never helps. Listen: We had our opportunity to win the game. I’ll take that on me for not helping my boys get that win. They are a great group of kids who put so much time in during the season and all winter and summer. I’m sad for my boys beyond what I can put into words. I watched a lot of these guys grow into young men and wanted to see them go further.”

Instead, John Jay will advance for the second year in a row and third time since 2010, 10th time overall.

“This feels amazing to share this championship with my brother and my teammates,” said Dean Ford, who suffered a season-ending knee injury during Jay’s Section 1 Class A football championship last fall but rehabbed incessantly to return for lax. “We sat together on the bus ride over and we talked about how the year’s been. He told me ‘It’s been eight months and it’s not just our time, it’s time for you to show everyone what you got’. My knee got in my head a little bit, but today I came out on top against a great team over there in Yorktown. Our coaches told us the only way we’d beat this team was if we were willing to put in the work. That one last sprint when you can’t feel your legs, you have to do it because in the fourth quarter against these guys, and your down two goals that hard work will pay off and it did with two of the last three goals and a defensive stand to win the game. This is unexplainable.”

Unacceptable is the word being tossed around Yorktown…

It was only nine years ago when Mamaroneck lacrosse wasn’t even considered a contender for the Section 1 Class A boys’ title, but after the Tigers ran their winning streak to 18 games with a 10-4 win over Lakeland/Panas in the Section 1 Class A championship game to repeat as Section 1 champs, it’s safe to say there’s a new sheriff in town.

Mamaroneck’s badge of honor now lays claim to five of the last eight Section 1 Class A championships, outright domination. The two-time reigning champion Tigers were only briefly threatened by an undermanned Rebel team that was playing without its key component, Dartmouth-bound middie TJ Bryan, plus high-scoring M Matt Makar. With Bryan on the field, Lakeland/Panas might have had a puncher’s chance at staging a Buster Douglas-like upset. Without him, the Rebs would struggle for possession all night, including the game’s first five possessions when the Tigers built a 5-0 lead. However, Lakeland/Panas rallied for four of the next five goals, cutting the deficit to 6-4 at the half. Reed Thompson (1A) scored first for the Rebs off a hard charge at the cage and Mikey Walsh (1A) added another choice tally to make it 6-4. In between, Mark Cummins and Mason Nocito chipped in with a goal apiece and the Rebel sideline erupted in a combination of relief and belief. But was short-lived as Mamaroneck resumed its pelting of Rebel goalie J.P. Walsh (seven saves).

“To be honest, I’m just happy we had a chance to play for that long,” Walsh admitted. “Without T.J. and Matt Makar it’s hard to win that game, but everyone gave it their all and as a team we couldn’t ask for anything else.”

Mamaroneck M Shane Smith won 15 of 19 faceoffs and controlled the game from the get, using a combination of technique and muscle to beat three different FOGOs Rebel Coach Jim Lindsay would throw at him in Bryant’s absence.

“We went 3 for 18 on face-offs and only took 19 shots,” Lindsay said. “I’m not sure we would have beaten their JV with those stat lines. Kids played hard, they adjusted well and fought as well as they could after going down 5-1 to start the game. It was going to be a tough test, but without TJ and Makar we were really outmatched, and the stats show it. That being said they’re very talented, deep, and senior laden, and they played like it. Proud of my kids for responding the way they did at the end of the year, especially losing key guys at a critical point. It would have been nice to have been healthy Thursday night, but that’s part of the game.”

LAX NOTES – If you don’t feel good for Briarcliff Coach Alfredo Meola winning the Class D title in overtime against Pleasantville, then you don’t have a moral compass. There’s simply no better dude on the Section 1 lax circuit than Meola, the former Lakeland All-American, who, ironically, won his first sectional championship ever as a player or coach on the field where he once wrecked dudes regularly. When ’Fredo was doing his thing at Lakeland, though, Mahopac ruled the Class A roost, denying Meola several titles in the wee ‘90s. It was something else to see him take a Briarcliff program that was once a rag-tag, doormat of an outfit to its first championship triumph.

“This is surreal,” Meola said. “To win my first championship as a player or coach on the field I learned the game on is an incredible feeling right now. We’re here to stay, though.” Well, done, my longtime chum…

With dismay/panic teeming the streets of Yorktown Saturday, I got note from a former player stating that the Husker alumni wants someone’s head on a spike after consecutive title losses. What I tried to diplomatically explain is that all things being cyclical Yorktown – despite being very talented in 2018, simply ran into a better John Jay team last year, and that this 2019 team – which has quality pieces and a stud All-American-in-waiting Keith Boyer on the back line — lacked a pure finisher and didn’t have that guy they’ve had in many championship seasons who could back dudes down with lower-body strength and power. While it’s totally understandable for the Yorktown alumni to rage into full panic mode upon failing to procure a 41st and 42nd sectional title the past two years, I hope they recognize the cream will rise again. I’m not ready to put this on Carney just yet, so put the spikes away, folks…

P.S. Boyer was the best player I saw in the entire tournament, no matter the classification: That kid is a combination of every former great Husker long pole. I see some Chris Watson in him, some Brett Makar, some Stephen McElduff, some Rob Doerr, some Brian Kuczma and even some of his brother Jose Boyer. This kid should emerge as the second player in Yorktown history to be a three-time A-A (Watson, the other)…

Gotta get this off my chest: Absolutely hate fact that the new @NYSPHSAA LAX classifications will abort the Yorktown vs. John Jay playoff rivalry starting next season with the Indians moving down to Class C next year. Best playoff rivalry we’ve had since 2006 may be done forever, depending on year-to-year BED numbers. Not only has the mandated extra classification watered down the playoff pool by foolishly going to four classes (A, B, C & D), now it’s gone ahead and destroyed what might be the finest Section 1 playoff rivalry we’ve had for most of two decades #ThisBlows.