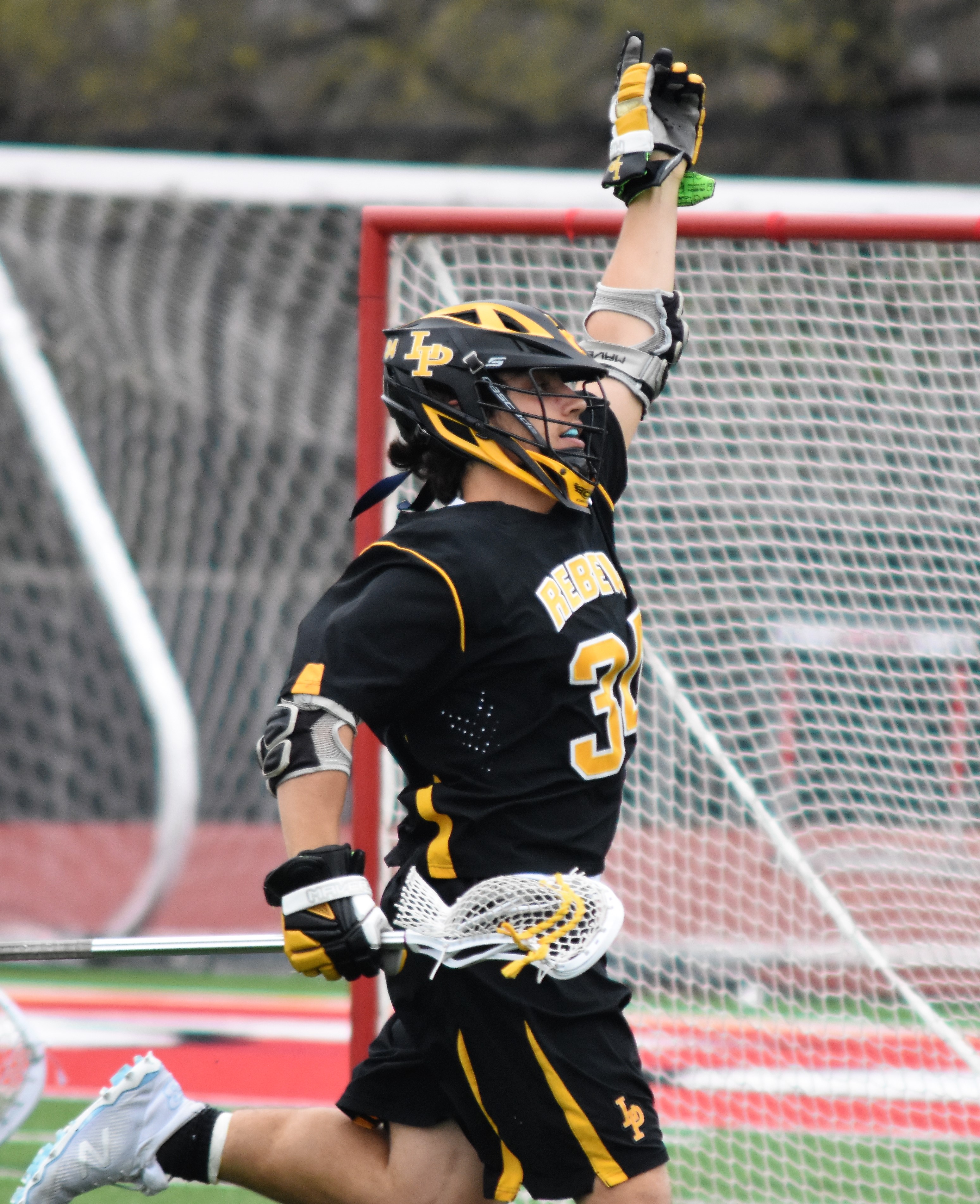 Lakeland-Panas M Sean Laukaitis celebrates 1 of 2 goals he would tally in 12-4 win over host Somers Saturday.

Since 1987, there have been only three Section 1 Class A championship games when the old guard — either Lakeland/Panas Rebels (plus the former Lakeland Hornets) and/or the Mahopac Indians — were not representing the region with a title berth on the line. Three times: 1988 Yorktown beat Mamaroneck, 8-1; 2006 when John Jay stunned Yorktown, 10-9, in a rare year when both Class B juggernauts were in Class A; and 2013 when Mamo’ defeated North Rockland, 7-4.

And depending upon whether last week was an aberration or sign of the times, we could be staring down the barrel of a fourth such occurrence if the old guard can’t clean things up by mid-May. Mahopac, winners in six of the last seven, suffered a head-scratching loss in an 11-10 setback to Class D Westlake, the current No.8 seed in its class. Coach Joe Bucello’s Indians – the current No.4 seed in Class A — were also in a one-goal dogfight with Horace Greeley, the current No.5 seed in Class B.

Lakeland/Panas, the current No.9 seed in Class A, has undergone a very rough stretch against some top-tier competition, but the recent 5-4 loss to current No.4 Wappingers and the one-goal loss to No.3 Scarsdale on April 11, while certainly not insurmountable, expounds the notion that even a Final 4 appearance will be a tough challenge for both L/P and Mahopac. There was once a time when that statement would be considered outlandish. The Rebels did right the ship some in a dominant 12-4 win over host Somers Saturday.

“That was the closest thing to a complete game we’ve played all year,” L/P boss Jim Lindsay said. “I’m proud of the kids for responding like they did after a bunch of tough loses. I thought we learned a lot from that tough stretch and started to grow up a bit, still a long way to and a lot to improve on.”

Yes, programs around the section are closing the gap; in fact, the gap is essentially a pin hole this season, with only 40-time Section 1 champion Yorktown separating itself from all comers. When Byram Hills and Westlake defeat Mahopac, when Wappingers knocks off Lakeland/Panas, when state-ranked (No.7) Mamaroneck wins four of the last eight Class A crowns… these are all things that are alarming for the to the old guard but certainly good for the high school game, which is growing nationwide at a rate that surpasses all sports. If the sport can ever grab hold in the inner-cities across the country, there’s no stopping it…

No.1 YORKTOWN –Class B state-ranked (No.4) Huskers (6-3 overall, 4-0 Section 1) are fairly young and have to trust the process and when junior Alex DeBenedictis pumps home four goals in a 15-7 loss to Class A state-ranked (No.4) St. Anthony’s, you get the feeling the Huskers will be fine in late May. The 4-2 win over Bridgewater-Raritan – in which Shane Dahlke, DeBenedictis and Tim O’Callaghan had one goal and one assist apiece, is just another step in the process for a Yorktown program that never seems to have a down year, unless you consider four runner-ups since 1997 a down year, which only they do.

No.2 LAKELAND/PANAS – Class A Rebels (3-5, 3-3) fell 4-3 to Section 2 power Shenendehowa and had lost three of their last four games by one goal despite a pair of tallies from Mike Walsh. The Rebels then went out and put it on Somers in a 12-4 victory behind Reed Thompson (2G, 3A), Mason Nocito (1G, 2A) and Sean Laukaitis (2G), not to mention the faceoff dominance of TJ Bryan and a solid defensive effort. More important than the much-needed win was the sense of unity and the energized L/P sideline, which leads one to believe the Rebels are in it to win it and will figure out a way to meet Mamaroneck in the title tilt. With 3 titles in the last 5 seasons, don’t put it past them. Now watch, all this love and the sub-.500 Rebs will go out and loss to state-ranked (No.4) Class D Briarcliff, who just rocked Scarsdale, this week #DontYouDare.

No.3 MAHOPAC – Class A Indians (6-3) won by a thread, 10-9, over Greeley in OT when senior Anthony Corrado found the back of the net for his second goal of the game. Junior M Tom Elliott scored four goals and senior QB Drew Riolo finished with one goal and four assists for the Indians, who only face one non-Section 1 opponent this year.

No.4 SOMERS – Class B Tuskers (4-5) got a much-needed 14-9 triumph of Hen Hud when senior Brandon LaSpina went off with six goals, the vast majority of those feeds coming from Nick Rossi (1G, 5A). Lorenzo Sessa has really come on of late, providing two goals and three assists. Conor Jaykus added a hat trick for the Tuskers.

No.5 HEN HUD – Class C state-ranked (No.11) Sailors (5-3) saw Connor Gallagher (6G, 1A) go goal-for-goal with LaSpina in 14-9 loss to Somers while Max “Pop” Popolizio added two goals and four assists, but the Sailors needed a third triggerman who never showed up.

HM PUTNAM VALLEY – Class D Tigers (5-4, 6-4) did not play well in the second half of a 10-9 loss to Haldane, losing to the Blue Devils for the first time ever. They played undisciplined in all areas of the game and need to take a long, hard collective look in the mirror if they intend to make the Class D Final 4, which won’t be easy as the current No.7 seed.

HM CARMEL – Class A Rams (4-3) have a chance to be above .500 when they face Mahopac: Does May 3rd mean anything to anyone? Can Aidan Babnick’s Rams make a game of it?

HM HALDANE – Class D Blue Devils (7-2, 6-2) are having their most impressive season in recent memory, but reigning NYS Class D champ Pleasantville is a tall order for anyone in the section these days, and will be so again in 2019.