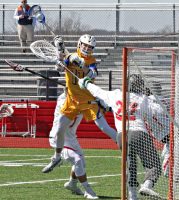 There are two regular season spectacles on the Section 1 boys’ lacrosse circuit that nobody wants to miss: There’s the Murphy Cup game between Class A Lakeland/Panas and bordering Class B rival Yorktown, and then there’s Yorktown vs. John Jay… the prelude to the eventual Section 1 Class B title tilt between the section’s two juggernauts who have met for six of the last seven title tilts.

And while Saturday’s rendition of the Yorktown/Jay game may have been missing the star power of the last two years, it certainly set the table for what could be a whale of rematch in late May, although it will be tough on reigning champion John Jay to make up the five goals they lost by in the Huskers’ 8-3 triumph at Charlie Murphy Field. Plus, Yorktown seemed to have some star power in the making, including Husker long pole Keith Boyer, a sophomore who simply dominated.

“Our boys played well,” Yorktown Coach Sean Carney admitted. “We played very determined and focused as a group. We played as a unit on both sides of the ball. It’s a long season and the schedule is very tough. We will continue to get better and don’t honestly look past anyone. That being said I have a lot of confidence in my team and I’m excited to watch them get better as the season goes on.”

It was a 3-0 game with only four minutes gone and Yorktown (4-1) was riding high behind goals from sophomore Blake Borges, Reese Andrews and Shane Dahlke. Andrews ended the first quarter with his second goal for a 4-0 lead. The shifty and powerful Borges, another super soph, made it 5-0 before Jay (2-2) finally solved the Yorktown defense.

Andrews and Tim O’Callaghan each scored twice for Yorktown. Alex DeBenedictis and Keegan Doller also scored for the Huskers, who saw steady G Dan O’Meara notch 12 saves. Brendan Williams won 10 of 15 face-offs for the Huskers, which was pivotal in setting the tone.

No.1 YORKTOWN – We’re just two weeks into the season and the Class B Huskers (4-1) have already defeated two reigning champions in Class A (Mamaroneck) and Class B (John Jay). The unthinkable, unmentionable notion that Yorktown might lose back-to-back Section 1 titles appears to be just that… inconceivable! Looks as though Lakeland/Panas and a really deep Rye club are the only legit threats among Section 1 teams, though smart money is on the Huskers right now. But Rye looks dirty in Class C. DeBenedictis and O’Callaghan each bagged a hat trick in the 13-3 win over Greeley while Borges added two goals and two assists and Shane Dahlke added one goal and two assists.

No.2 LAKELAND/PANAS – Class A Rebels (2-0) will find out what they are made of today when Mamaroneck comes a calling. In the 17-5 win over Ossining, Mike Walsh tallied a career-high five goals and Tom Nolan scored thrice.

No.3 MAHOPAC – Class A Indians (3-2) made the necessary strides toward evolving into a championship contender in a pair of quality wins last week, including a 13-11 win over Somers Saturday, in which Drew Riolo (4G, 6 A) was masterful. A 9-8 win over Scarsdale got things rolling behind two goals apiece from Anthony Corrado, freshman Mike Harney and Tommy Elliott. The offense seems to be coming along, which was clearly the main concern. “It’s getting better and better each and every day,” ’Pac Coach Joe Bucello said.

No.4A PUTNAM VALLEY – Class D Tigers (4-2) chalked up a solid 8-7 win over Class A Carmel in 3 OTs when senior M Joey van de Veerdonk picked up a hat trick with 1:12 gone in OT, which snapped a two-game skid. Vandy was dandy, notching a pair of assists as well. Junior A Kyle Wassil added two goals and one assist. Rams Matt LaFontaine (3G, 1A) and Aidan Babnik (2G, 2A) kept a feisty Carmel club afloat. The Tigers also crushed Hastings, 15-6, at West Point behind Alex Sirico’s big day, including 4G, 1A, and Jack Longden (3G, 1A).

No.4B SOMERS – Class B Tuskers (2-2) dug a pretty deep ditch in the loss to Mahopac, falling behind by six goals before rallying in the second half to make it a game, but it was the 12-goal blowout loss to Rye that has me most concerned.