The Westchester County Board of Legislators is proposing a new law that aims to protect reproductive healthcare facilities and their patients from threats and interference by protestors looking to deny services to women.

The Reproductive Healthcare Facilities Access Act would strengthen what is currently on the books by prohibiting threats and harassment of patients and providers by potentially making it a crime to prevent someone’s access to a facility or to interfere with those providing services.

Under the current draft of the bill, aggrieved parties would also be able to initiate a civil action against those who violate the law. The county could also bring a civil lawsuit.

Board Chair Catherine Borgia (D-Ossining), who has worked to get a form of the bill passed for the 11 years she has served as county legislator, said Monday that the recent draft decision leaked from the U.S. Supreme Court that would jeopardize Roe v. Wade as well as increasingly menacing actions taken by abortion opponents against clinics has highlighted how critical the measure would be.

“This is a bill that is not about reproductive healthcare, really, it’s about respect, it’s about the opportunity for women to have autonomy and control over their own choices without being bullied or harassed or being treated in anyway as being unable to make their own decisions,” Borgia said.

Last November, a group of anti-abortion protestors gained access to All Women’s Medical in White Plains to confront patients who were receiving care. In March, three men who were involved in the incident were found guilty of criminal trespassing. They are scheduled to be sentenced next month.

A co-sponsor of the bill is County Legislator MaryJane Shimsky (D-Dobbs Ferry) who has also worked to have similar legislation passed before. She said in 2012, the board approved a bill that resembled the current proposal but it was vetoed by former county executive Rob Astorino. At the time, the Democrats did not have a supermajority on the board.

“Allowing behavior like the clinic invasion at All Women’s Health threatens more than the right to abortion and other reproductive health services,” Shimsky said. “It also threatens the public safety and the concept of ordered liberty with which no society can function.”

A critical element to the law, is not to make it so punitive that legitimate protesting under the First Amendment is curtailed, she said. That is one of the key points that will be reviewed in committee.

Catherine Lederer-Plaskett, president of the White Plains-based Choice Matters, said anti-abortion activists have become so emboldened recently, especially in other areas of the country, that many people do not understand the full scope of the threats that have been made.

She said many women come to the clinics for care and procedures that are not abortions, but the extremists’ goal is to shut down facilities.

“What this bill does, which is exceptional, is it addresses the kind of violence that is happening today,” Lederer-Plaskett said. “It used to be external. It used to be bombing the outside of your building. Now they’re coming in. They’re coming in and invading the space of patients who came in a private moment to have healthcare.”

Under the current draft of the law, a violator, if found guilty, could receive a fine of up to $1,000 and/or up to six months in jail for the first offense. For a second and each subsequent conviction, the penalty could reach up to $5,000 and/or up to one year in jail.

Vincent Russell, president of Planned Parenthood Hudson Peconic, said security is so important to the organization that it has invested $2 million at its health center in White Plains to move the front patient entrance to the back of the building to shield patients from the protestors who stand on the street.

“And in light of the news last week and the efforts across the county to restrict or abolish abortion access, I would like to say thank you for taking this step and this measure, and it is quite uplifting to have a supportive legislature doing this for us at this time,” Russell said.

The bill will head to the Legislation and Health committees for further review. 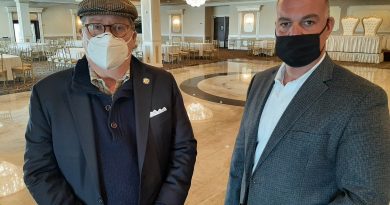