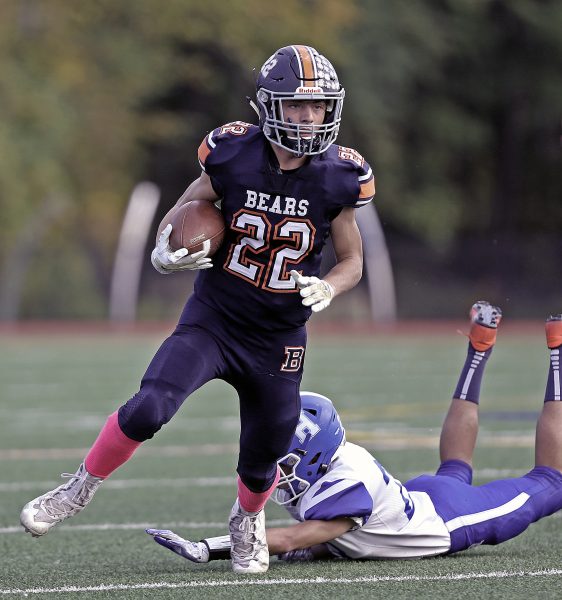 Brandon Rispoli of Briarcliff runs with the football in Saturday’s 43-8 rout of Haldane.

With just 18 players on its roster, and only 17 in uniform, the Haldane football team didn’t figure to have much success on Saturday afternoon trying to stop the high-powered offense of Briarcliff/Hamilton.

As it turned out, the Blue Devils provided little resistance to the Bears, who needed just 21 seconds to get on the scoreboard and then spent the rest of the opening half marching up and down the field piling up the points.

Quarterback Nick Reish passed for one touchdown and ran for three others, while sophomore running back Brandon Rispoli finished with 105 yards on the ground and two TDs as the Bears built a commanding halftime lead and then coasted to a 43-8 victory on Homecoming.

The Bears, now 5-1 and winners of two straight, opened the game by moving the ball 53 yards in just two plays. Reish connected with Jaylen Savage on a 44-yard pass play on first down, then kept the ball himself, running to his right and spinning his way into the end zone. Reish then ran in again for the two-point conversion that gave the Bears an 8-0 lead not even a half minute into the contest.

Haldane managed to advance past midfield on its first possession of the sunny afternoon, but on fourth-and-two, running back Darrin Santos was stopped short. The Bears took over at their own 44 and, eight plays later, Reish ran for an 11-yard touchdown. The point-after kick from Jamey Francis increased the Briarcliff/Hamilton margin to 15-0 with 6:41 still left in the first quarter.

The Blue Devils soon got near midfield again on their second possession, but a floating, off-balance pass by quarterback Daniel Santos was picked off by Savage. The Bears started from the Haldane 37-yard line and needed just over a minute to find pay dirt once more. Reish’s perfect lob pass on first down from the 26-yard-line was hauled in by Savage for another touchdown. With 3:54 left in the period, the Briarcliff lead was up to 22-0.

Taking advantage of three Bear penalties, Haldane moved to the Briarcliff 28-yard line, but the drive ended when quarterback Santos was tackled after a short gain on fourth-and-15. On first down, a play-action pass from Reish to a leaping Savage picked up 27 yards.

The second quarter began with the Bears at the Haldane 44. On third down, with 19 yards to go, Reish delivered a long pass down the right sideline to Rispoli, who caught the ball at the 3-yard-line despite double coverage. Two plays later, Reish easily stepped into the end zone again. The extra-point try failed, but the lead was still 28-0 just over three minutes into the period.

After the Blue Devils went three-and-out, Briarcliff/Hamilton got the ball back at the Haldane 40. Rispoli ran left for 14 yards on first down, then on an option run two plays later scored a 23-yard touchdown with a second-effort dive across the goal line. Reish then threw to his left to a sliding Jackson Mauro for the two-point conversion that extended the lead to 36-0 with 4:48 remaining in the half.

Nothing at all went as planned for the Blue Devils, so when Darrin Santos returned the ensuing kickoff 95 yards for an apparent touchdown of course it was called back by a penalty. The Blue Devils were soon punting from just in front of their own end zone, setting the Bears up for one more first-half scoring drive.

Starting from the Blue Devil 39-yard-line with just over three minutes to go, Briarcliff was penalized on first down. So the Bears instead wound up going 47 yards in five plays, with Rispoli cutting left and managing to stay inbounds along the left sideline for a 16-yard touchdown run with 38 seconds left on the clock. The PAT by Francis gave Briarcliff/Hamilton a 43-point halftime advantage.

Reish and Rispoli got to watch the second half from the sidelines as the Bears, after running up the score in the first half just ran out the clock in the second. Haldane finally managed to score with 4:13 left in the third quarter as Daniel Santos ran for a 14-yard touchdown. He then tossed a pass to Julian Forcello for the two-point conversion that concluded the day’s scoring.

The Bears will now take to the road as they look to continue their winning ways. They play at Blind Brook on Saturday at 1:30 and then travel to Rye Neck the following Saturday for another 1:30 kickoff.