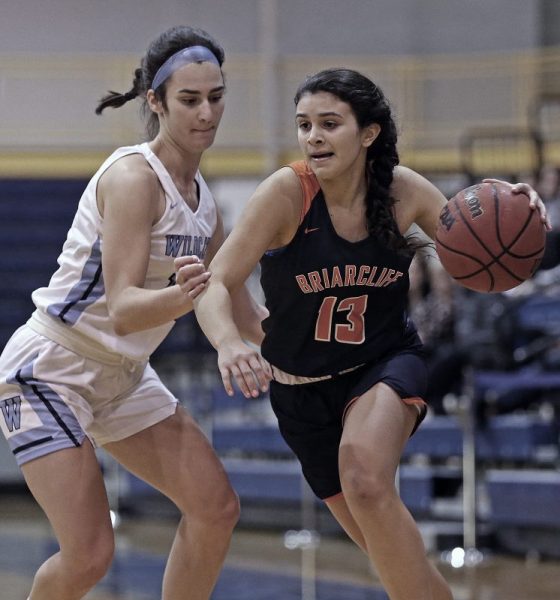 Fueled by four 3-pointers, the Westlake girls’ basketball team played its finest eight minutes of the season on Friday evening. The Wildcats outscored undefeated Briarcliff 16-8 in their dazzling third quarter and whittled a 10-point halftime deficit down to just two.

But the Bears answered with a 7-0 burst over the first 90 seconds of the final quarter to thwart the Westlake comeback bid and went on to a hard-fought 52-45 victory in the championship game of the 16th annual Lt. Charles Garbarini Memorial Basketball Tournament at Pace University. Alana Lombardi scored a game-high 18 points and freshman Cat Carrafiello added 12 as Briarcliff won the title for the fourth straight time.

“Yeah, that was big,” said Bears head coach Don Hamlin afterwards about his team’s response at the start of the fourth quarter. “Obviously the longer a game is tight like that, the more likely it is that it’ll slip away. They came up big when we needed it right there.”

Briarcliff, now 9-0, never trailed all evening, though the offense struggled early as Lombardi was sent to the bench with two quick fouls. The upset-minded Wildcats managed to tie the game four different times in the first half, but still a buzzer-beating 15-foot bank shot by Kaitlyn Ryan enabled the Bears to close the second quarter on a 6-0 spurt for a 31-21 halftime cushion.

Just 20 seconds into the second half, Westlake’s Allie Castellone, who along with Nicole Karaqi finished with a team-high 12 points, provided a hint of what was to come from the upstart Wildcats, drilling a 3-point shot from the right corner that ignited an 11-4 burst.

“To start the third quarter, I said the first two minutes are gonna be very important,” Wildcat coach Sean Mayer told his players. “Briarcliff is gonna come out very strong. We can’t let them go on a quick 8 or 10-0 run. We’ve got to make plays and, boy, did we ever. Although the score did not come out our way, that was by far the best game we’ve played all year.”

A left-corner 3-pointer from Karaqi nearly midway through the third quarter cut the Briarcliff lead to 35-32. The Bears responded with back-to-back baskets by Carrafiello and Lombardi, but then didn’t score again over the final three minutes of the period. Meanwhile, Westlake got a trey from ninth-grader Sami Oswald and then a drive down the lane by another freshman, ToniAnn Mastracchio, just before the buzzer to end the quarter within 39-37.

But Westlake, just 3-8 this season, quickly lost momentum once the fourth quarter got underway. The Bears’ Julia Barbalato began the period with an 18-foot jumper and Lombardi soon followed with an old-fashioned 3-point play.

A minute later, Lombardi scored on a fast-break layup and the Bears’ lead was suddenly back up to nine points. Though a Karaqi 3-pointer cut the Wildcats’ deficit to 46-40, that was as close as they would get. Consecutive buckets from Barbalato and Lombardi stretched the Briarcliff advantage to 10 points with 5:26 remaining in the game.

Lombardi connected on a 12-foot jumper from left of the lane with 4:45 left on the clock. The Bears never scored again, though it hardly mattered. A 3-pointer by Riley Neglia, the Wildcats’ 10th of the game, trimmed the Briarcliff lead to seven points, but the score never changed again over the final two minutes and forty seconds of the contest.

“Obviously you want to continue to score,” said Hamlin, “but I felt like our fourth quarter defensively was as good as it’s been. I really wanted to focus on that, not so much the missed opportunities.”

Westlake had arrived at Pace still licking its wounds from a lopsided loss on the road just two days earlier. According to Mayer, whose roster includes four freshmen and four sophomores, the Wildcats took a big step against the Bears.

“We just had a very rough game against Pleasantville,” he said. “I wanted to see how we respond. And, boy, did they respond well. So I’m proud of ‘em. I think going forward, the girls will have confidence now. I’m gonna tell them right now this is what we need to do and this is what you’re capable of doing. As a young team, it’s important to have a game like this to get confidence.”

For Hamlin and the Bears, a perfect record almost halfway through the regular season is not something they will be dwelling on. But at least on Friday night, they could take a few moments to relish the fact the impressive Garbarini trophy, and all it represents, has been handed to them each of the four years the tournament has been contested by the four Mt. Pleasant-area schools.

“Honoring anybody with the significant impact that Mr. Garbarini had on his community,” Hamlin said, “and, obviously, the 9-11 tragedy, any time we can do anything to honor those guys, we’re more than happy to.”