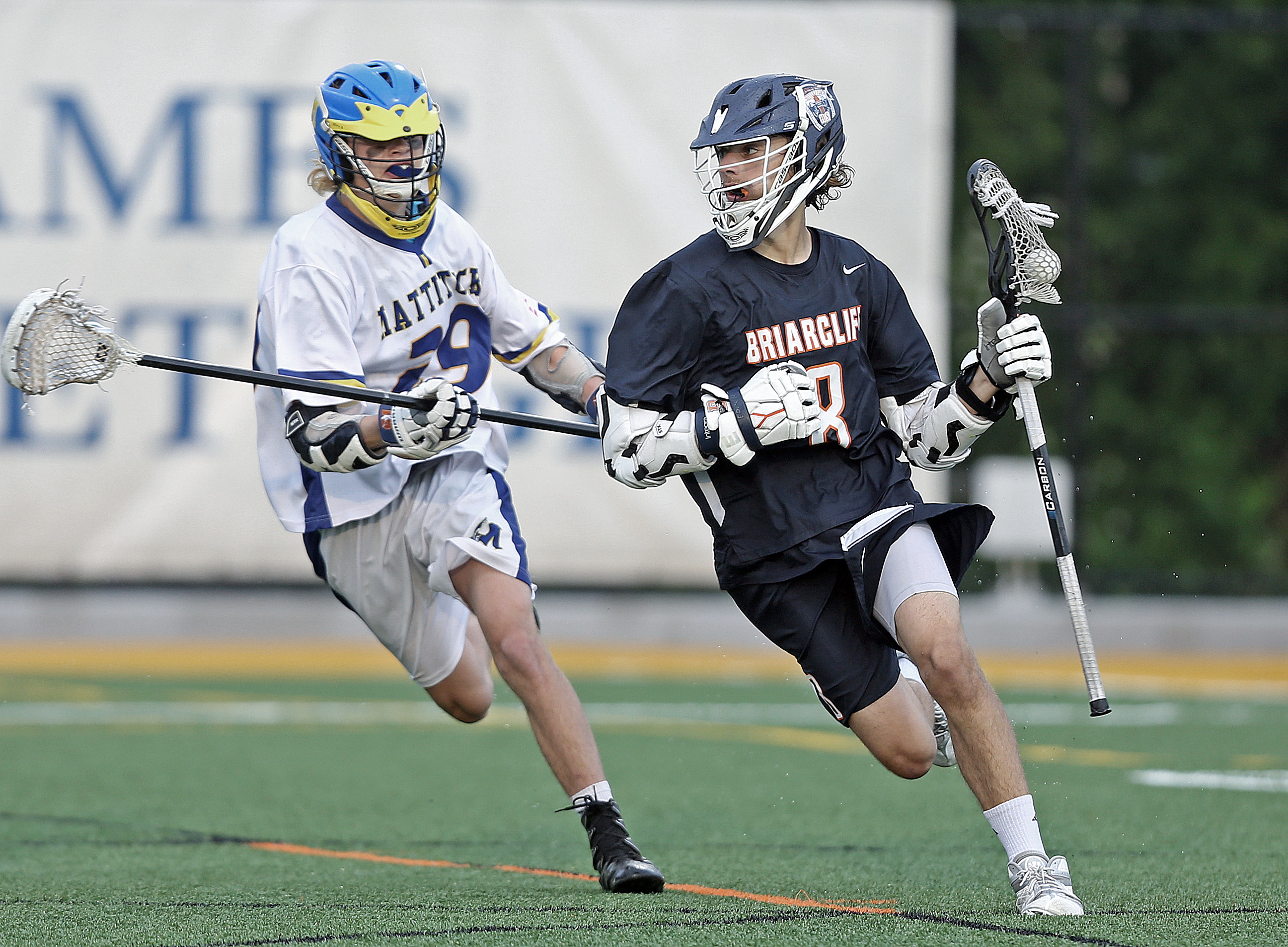 The Bears’ Spencer Rockmore dodges his way toward the front of the cage in the state semifinals.

Anthony Capasso and Jack Ricciardi each scored three goals in the opening half as the Bears built a commanding lead and went on to a 10-3 rout of Long Island champion Mattituck in the state Class D regional finals at Adelphi University. Tied at 1-1 after the first quarter, Briarcliff erupted for seven unanswered goals in the second and cruised the rest of the way.

“I’m proud of the way our boys played, they were ready to go,” said Bears head coach Al Meola after his team had punched its ticket to the state championship game three days away against Section 3’s LaFayette/Onondaga. “I thought our defense came out to play tonight. They were playing pretty stingy and they did a nice job of taking away time and space on those guys.”

The game was still scoreless and heavy rain had just started falling when freshman Matt Waterhouse finally put the Bears on the board with a shot from right of the cage with 3:28 remaining in the opening quarter. Mattituck managed to tie the contest just 31 seconds later, but once the game headed to the second quarter the Tuckers found themselves playing from behind the rest of the night.

“We took, like, six shots before that goal,” said Meola about the rocket in the rain by Waterhouse. “Trying to be too cute and too fancy with it and we were missing the cage. And finally Matt just put one on net and it went in, and we were like just put the stick between the pipes. That’s what we always say. Finish stick between the pipes and don’t worry about aiming so much sometimes. Just put the ball on net and see what happens. Shoot with no conscience, kind of thing.” 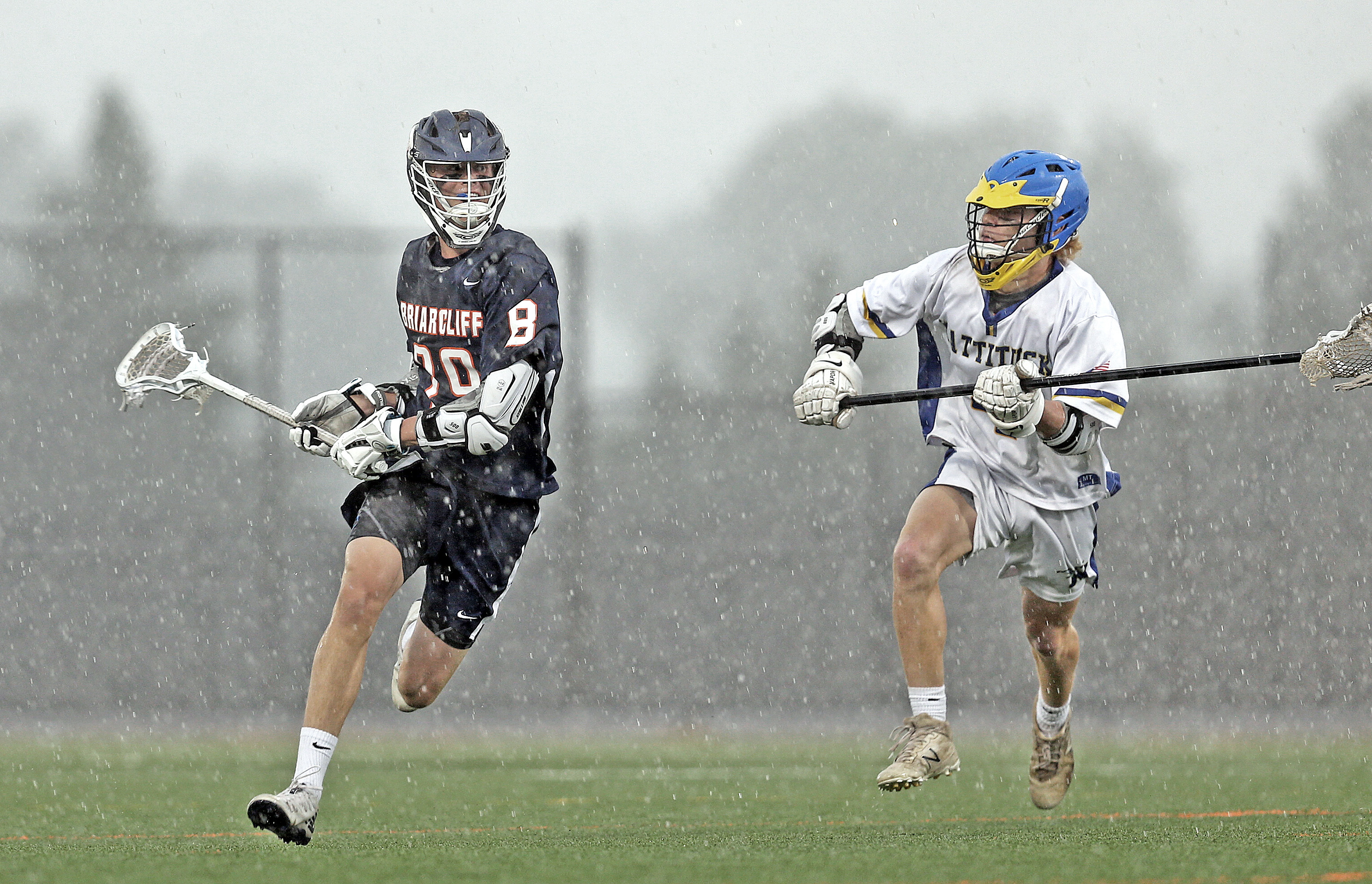 Briarcliff’s Matt Waterhouse is about to score the first goal in last Wednesday’s 10-3 win over Mattituck in the state semifinals.

Just 90 seconds into the second quarter, Capasso, a sophomore midfielder, scored from left of the cage to give Briarcliff a lead it never relinquished. The Bears’ margin grew to 3-1 after Waterhouse retreated to win a race for a ground ball near midfield, leading to a goal from Kyle Proctor with 7:26 to go before halftime.

Ricciardi soon added to the Briarcliff lead, coming around the back of the cage and sending a low shot past Tucker goalie Tyler Shuford from the right doorstep with 4:36 remaining in the second quarter. Nearly two minutes later, Capasso finished a long Bear possession with a shot from right of the cage and then danced in celebration as the lead stretched to 5-1.

But it wasn’t until the final minute of the half that it became obvious the Bears would be the team making the long ride up to Rochester come the weekend. Capasso tallied his third goal of the game with 59 seconds on the clock. Just 14 seconds later, the Tuckers’ last good chance to climb back was thwarted as Briarcliff goalie Ian Leahy denied Dane Reda from point-blank range.

Leahy’s big save set the stage for a pair of goals from Ricciardi just seven seconds apart. The first one came with 19.4 seconds left in the half and the Bears up a man. His second one sent Briarcliff into the intermission in possession of an overwhelming 8-1 advantage.

“Yeah, it was awesome,” said Meola about the late first-half surge that his players used to blow open the game. “At halftime, they were buzzing and feeling good about themselves. We came out flying in the second quarter. The boys played pretty well. In transition, they got up and down. Our clears were really good, so that helped us a lot.”

The second half began with no sign of a Mattituck comeback. Aidan Murnane, the Bears’ sophomore defenseman, increased the lead to 9-1 when he ran all the way around the back of the cage, reemerging on the left side and scoring with just 95 seconds gone by. The Bears didn’t score again the rest of the period, but it hardly mattered as the turnover-prone Tuckers could only answer with a lone goal from Reda with 3:27 left.

The fourth quarter was scoreless until Andrew Kanovsky provided the icing on the cake for the Bears, racing down the middle of the field and firing a left-handed shot into the back of the net with 6:25 left to be played.

“It felt pretty incredible,” said Kanovsky, a defenseman who will soon be delivering the valedictory address at Briarcliff’s 2019 commencement. “I think I might be the only senior on the team who doesn’t have a goal at all this year. So I was really looking for it the whole game and I finally picked up the ground ball, came down, and thankfully my coach gave me a call to sort of just spread everyone out and they let me take it to the goal. Fortunately, I was able to finish it. Pretty incredible.”

For Kanovsky, his fourth-quarter goal was a long time coming.

“I used to play attack until fifth grade and I don’t think I’ve scored a goal since then,” he said. “Finally getting back on the scorers’ sheet was definitely something special.”

Mattituck closed the game’s scoring with a goal from Max Kruszeski with just under five minutes remaining and moments before a second downpour quickly swept across the field. By then, several of the Bears’ primary offensive weapons were already watching from the bench as seldom-used reinforcements got some playing time.

“When we had the lead in the fourth quarter,” said Meola, “I just wanted to make sure we don’t have any injuries going up to Rochester, especially some of our top guys. We wanted to make sure we keep ‘em healthy. They had to sit out the fourth quarter, but, you know what, these other guys are sitting on the bench cheering them on all year. So I think it works out well for them.”

Though the Bears rolled past Mattituck with their second-quarter explosion, Meola was quick to point out that it wasn’t as easy as it seemed to be, that the Tuckers were a team to be reckoned with after finishing above .500 against some very stiff competition on Long Island.

“They played big schools with real tough schedules,” he said. “I don’t know if people realize that. We knew that they were gonna come hard and they had some talent and stuff, and pretty well coached. But we were ready for it. We scouted them pretty well. We watched a lot of film. Our game plan, our study packet, was pretty thorough — on every single player, on everything they do.”