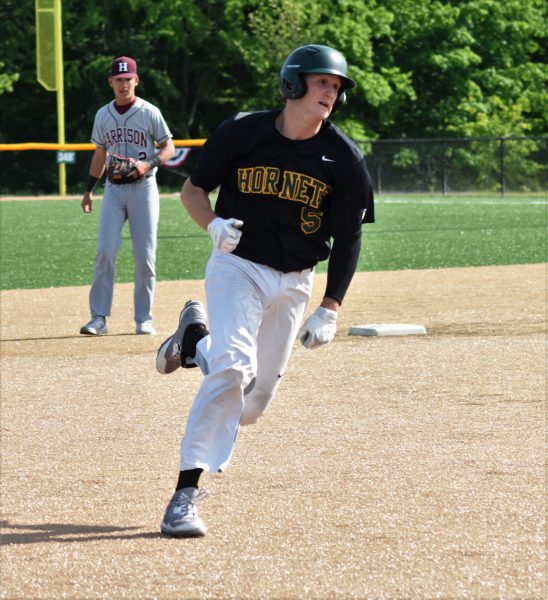 NYS Gatorade Player of the Year Joe Vetrano round 2B in Hornets’ 7-5 win over Harrison last Wednesday.

Vetrano Named NYS Player of Year; No.1 Seeded PV Ousted by No.8 Keio

And just like that we’re down to one team standing. Of course, that one team is the No.1 ranked team in NYS Class A, the LAKELAND Hornets (21-1), which advanced to the second round of the Section 1 semifinals after Saturday’s 3-0 victory over No.4 Nyack at the Granite Knolls Complex. Lakeland reached the semis by virtue of a 7-5 win over No.9 Harrison in last Wednesday’s quarterfinal. The 2018 NYS runner-up Hornets were set to face No. 2 Rye yesterday with a berth to the finals on the line. The championship round is set to being on June 1st at Pace University.

Against Nyack (16-6-1), Lakeland ace Joe Vetrano needed just 79 pitches to improve to 9-0 while lowering his ERA to a section-best 0.39 this season; additional testimony for his recent NYS Gatorade Player of the Year honor. Vetrano joins Jonathan de Marte (circa 2011), a two-time winner, as Lakeland’s only Gatorade winners.

“It’s a well-deserved honor,” Lakeland Coach Bill Casey said. “He helps this team every game one way or another, either with the bat or on the mound, and oftentimes both. And he’s just a great kid.”

The 34th-annual Gatorade award, which has gone to players like Derek Jeter in the past, honors a combination of athletic excellence, academic achievement and character demonstrated on and off the field, acknowledges Vetrano as the top student athlete in the state.

“Joey plays the game the way it was intended,” Casey said. “Joe treats everyone, teammates and opponents alike, with respect. He is the ultimate teammate.”

The 6’3” 210-pound lanky lefty allowed just one hit and whiffed seven batters, eliminating 18-straight to conclude the game while facing one batter over than the minimum (21). The Boston College-bound Vetrano has not allowed a run in his last four outings, including a pair of no-hitters against Yorktown, and has allowed just one earned run since the season opener on March 26.

“My catcher Zach Lerman called a fantastic game,” Vetrano said. “He mixed all the pitches up great. Our defense was spectacular. Leo Cummings and Zach Cohen made great plays behind me.”

Vetrano didn’t get a ton of support offensively but got all the help he would need when IF Zach Cohen stroked an RBI single to left to precede Andrew Croce fielder’s choice RBI. Jason Green singled and scored in the three-run third.

Against Harrison, Lakeland P Evan Berta was the unquestioned star. The junior pitched six scoreless innings, fanning seven for the win. He took matters into his own hands at the plate, going 2 for 3 with a home run, a triple and five RBI. Lakeland needed every single run as the relief core imploded in the seventh, allowing the tying run to reach second.

Last Wednesday, turned out to be a bleak quarterfinal day for teams not named Lakeland, including No.7 BREWSTER, a 12-2 loser to No.2 Rye, and No.5 HEN HUD, which suffered a 5-0 setback to No.4 Nyack. YORKTOWN Coach Sean Kennedy’s final game after 20+ years with the program ended with a 10-6 quarterfinal setback to No.3 Byram Hills. The 11th-seeded Huskers (13-8) got a big effort from C Luan Biberaj, who went 3 for 4 with a double and three RBI.

On the heels of junior P Bobby McBride’s one-hit, 2-0, shutout of No.10 Nanuet on Tuesday, Brewster met its match in a Garnet club hell-bent on revenge after falling to the 16th-seeded Bears a year ago as the No.1 seed in the 2018 tournament. Rye took no chances with the Bears (12-7-1), lining up ace Declan Lavelle against the Bears, who struck out 10 times and scratched out five hits. The Garnets broke open a 3-1 game with six in the fourth.

Against Nanuet, McBride whiffed a season-high 14 batters and carried a no-hitter into the sixth before the Golden Knights broke through with a harmless single.

Hen Hud took a 2-1 opening round win over No.12 Pearl River into the quarters, doing so behind a great effort from ace Nick Hiltsley, who also stroked a walk-off single with the bases loaded in the bottom of the seventh.

Against Nyack, Johnny Glashoff and David Buscetto each went 2 for 3 for Hen Hud (14-6-1), which left 10 runners on base and failed to get the clutch hit they needed.

PUTNAM VALLEY Coach Joe Natalie was beside himself in frustration after last Wednesday’s quarterfinals when the top-seeded Tigers (16-4) committed five errors and lost, 4-3, to No.8 Keio. Yoichiro Ohashi squeezed home the winning run for the Unicorns (12-8-1), who were eliminated by Westlake in the semis. Tiger senior ace T.J. Brescia went the route for Putnam Valley, allowing just one earned run on four hits while striking out 11 in a solid performance. The Unicorns snapped the Tigers’ 14-game winning streak, leaving many to wonder about the future of Coach Nats, who has legitimate family concerns with two young ones and nearly 15 years on the Tiger sideline. It entirely possible that PV is in the market for a new coach next season. If so, the soft-spoken coach has left the program in a good, respected position, but just like the basketball team did as a No.1 seed, the Tigers were reverse bracket-busters, which is never a good thing.