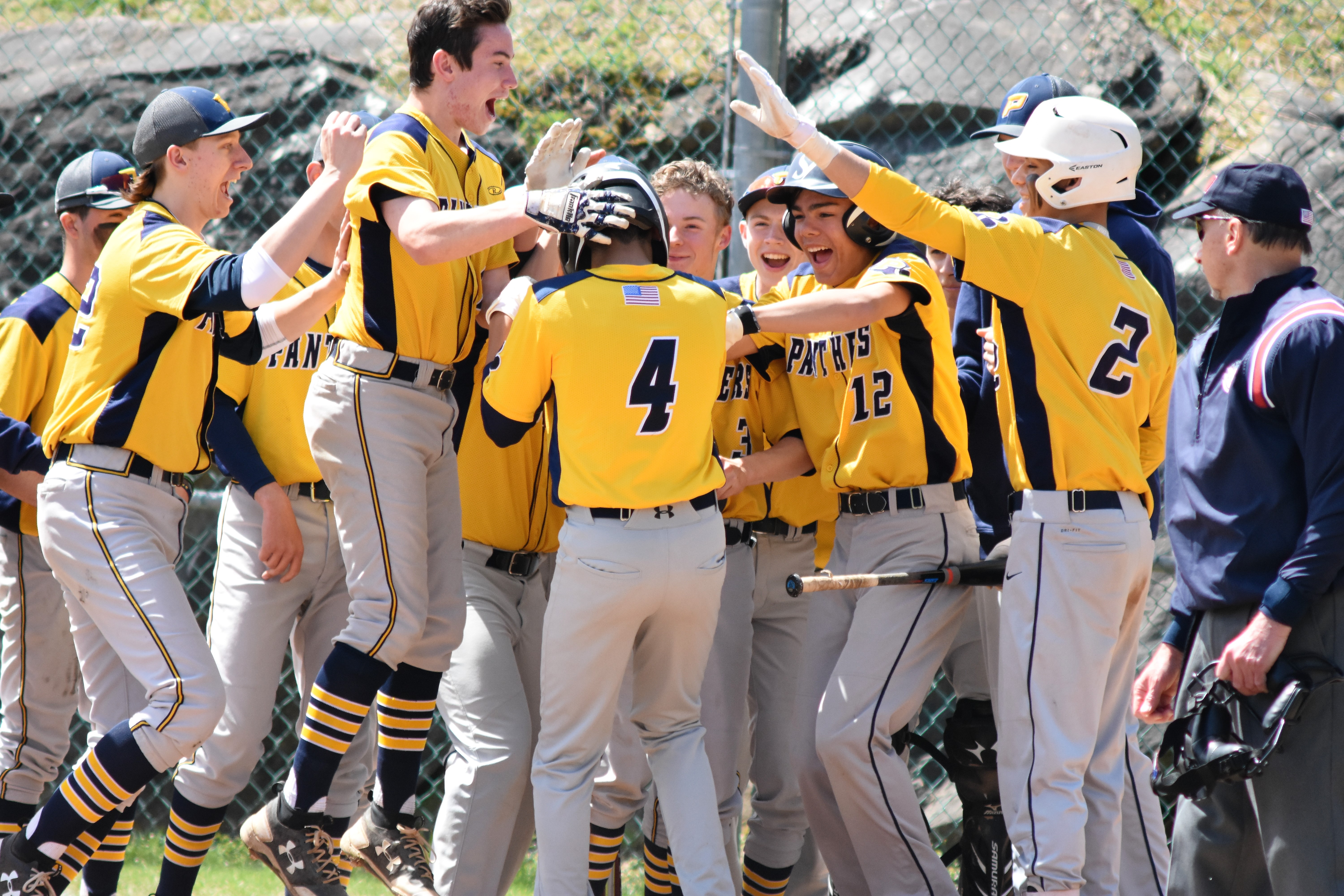 Yorktown’s Kennedy Has Left a Mark, No Matter What Future Holds

It would be hard to go against Class A YORKTOWN for the win of the week, a gallant 6-3 triumph last Friday over visiting Class AA MAHOPAC, which came courtesy of a three-run walk-off home run off the bat of senior Anthony Fusco, the heart and soul of Coach Sean Kennedy’s Huskers (6-3).

And it’s just as hard to root against the Cornhusker coach, who has been a true battler throughout his career. Against all odds in a district that lives and breeds lacrosse players, Kennedy has built a blue-collar baseball program that may play second fiddle to lax but never gets short-changed when it comes to respect on Section 1 baseball circuit.

Here’s the thing about respect: It starts at the top of any organization. Kennedy demands it and mutually affords it. He’s the kind of coach any parent would want their kid to play for.

“Many people measure coaches through wins and losses, I measure coaches on the depth of character they have and the leadership of the head coach during tough times,” said John Jay EF Coach Eric Frink, who teaches at Carmel and has competed against Kennedy for two decades. “Sean became a great friend through baseball. We not only share teaching US History and coaching baseball, we’ve leaned on each other during tough family times. Sean runs a good program for the kids in Yorktown. His kids have class and play the game the right way.”

When the leader of a unit oozes class, it’s got a trickle-down effect… from the lead dog to the last in line, according to Yorktown AD Rob Barrett.

“Sean is such a good guy, a good coach,” Barrett said. “He puts in a ton of time. His athletes love him and he is well respected throughout the section. I’ve been lucky to inherit a handful of seasoned coaches that understand students and the expectations in Yorktown. Some shy away from it, but Sean clearly has embraced it and brings a very professional approach. He has done a lot to enhance the program.”

Kennedy has been around Yorktown baseball and Section 1 long enough to have been an assistant under former Coach Bob Sarro, who led the Huskers to their second sectional title in 1995, and long enough to see former Section 1 greats reemerge as coaches, including Mahopac Coach Myckie Lugbauer, who slugged his way to the University of Maine before returning to his alma mater; only to suffer a tough loss last Friday.

“I have had the pleasure to not only coach against Coach Kennedy but also play against teams he has coached as a high school athlete,” Lugbauer noted. “Coach Kennedy is one of the good guys in high school baseball. His teams are always well prepared. I always enjoy having the opportunity to play his teams because I know we will be in for a good game.”

Coach Kennedy has young, growing kids, who need his attention more than ever, so the end of the line is likely near, and when and if he does decide to call it a career, replacing him will be a tall order.

“I’m trying to convince him to think about things,” Barrett said…

In Yorktown’s 7-4 win over Horace Greeley, P Joe Lombardo allowed one run, scattering five hits over six innings with five strikeouts for the win. Fusco and Tyler Pugliese each had an RBI…

And speaking of impactful coaches, HEN HUD has had the fortune of having Assistant Coach Dutch Pritts in its dugout for over 30 years, and the Sailors relayed their gratitude last Thursday night at Peekskill Stadium when they honored the great Dutchman. Former players and dignitaries lined up to thank Coach Pritts, who remains a part of Coach Van Vourliotis’ program long after serving as former Coach Paul Natale’s right-hand man for over 20 years,  including a 2000 Section 1 championship season, in which his son Mike was an absolute stud. Hen Hud is off to an impressive 8-2 start, and it would sure be sweet to send Coach Pritts off on a high note…

CARMEL had an up and down week, but the youthful Rams (3-5-1) are starting to figure it out. Coach Joe Hackert has, through no choice of his own, thrown that Rams to the wolves. With very few impactful upper classmen, Carmel’s young-ins are being baptized under fire.

In Carmel 10-2 win over host Somers, P Joe Christiana gave the Rams a second quality start in a row, flowing Jack Sullivan’s seven shutout innings against WALTER PANAS. Christiana did not allow an earned run while allowing two hits with six strikeouts over five innings for the win. Carmel C Anthony Febo, another in a long line of sophomores, went 2 for 5 with a double and three runs scored.

In the 3-0 loss to Panas (4-4), Sullivan was sensational before being lifted in the seventh. Panther freshman P Aidan Cohall matched Sullivan for 6-2/3rds innings before yielding to reliver Don Hopper, who earned the win when Cohall stroked a three-run homer in the top of the eighth. Hopper pitched 2-2/3rds for the win while providing the senior leadership this young team needs. If the versatile Cohall isn’t on your radar, then you’re not paying enough attention. This is a kid you’ll be hearing about.

“Keep an eye on him,” Panas Coach Anthony Fata said. “He’s special. He hits the ball and plays the game.”

Carmel was admittedly frustrated by both Cohall and Hopper, but the Rams put the time in to correct things and worked a 10-2 victory over SOMERS the next day when P Joe Christiana allowed two hits over five scoreless innings, fanning six Tuskers for the win. Carmel C Anthony Febo went 2 for 5 with a double and three runs scored.

“We were so frustrated after that Panas loss that we took BP at 5:00 p.m. that night and ended just before dark,” Hackert said. “The good thing is that while we may be going through some growing pains, these kids love the game of baseball.”

However, the Pride (6-3) could not solve PUTNAM VALLEY P Matt Carlsen the day before in a 3-2 Tiger win over the Pride. Carlsen fired a tidy two-hitter with seven strikeouts and no earned runs. PV 1B Matt Carravone went 2 for 3 with a run scored and an RBI and John Millicker homered for the second time in as many days, also doing so in Putnam Valley’s 11-0 win over Keio who was mastered by PV chucker T.J. Brescia, who threw a one-hitter with six strikeouts. He also tripled and homered with four RBI. Millicker went 2 for 3 with two runs scored, a home run and two RBI for the Tigers (5-4).

Peter Bossinas allowed one run over five innings with six strikeouts and went 2 for 3 with an RBI for the Pride in the PV loss, from which the Price responded with a 6-5 win over Scarsdale, who took the early 4-0 lead. Ossining stormed back with two runs in the third and two more in the fourth. The game was tied going into the top of the seventh when Scarsdale scored a run to take a short-lived lead. In the bottom of the seventh, Ossining roared back and scored two runs in the bottom half on a walk-off single by Nick Cascione. Pinch runner Jose Reyes scored the winning run.
“Kudos goes to Nick Cascione for getting the big hit in the seventh,” Ossining Assistant Coach Joe Hazen said. “Joe Bossinas, the starter who gathered himself after the first inning, pitched three scoreless innings and hit a huge double in the bottom of the seventh to put the potential winning runs in scoring position. Nick Constantino came on in relief for three innings and kept the game close to earn the win. And Jose Reyes is always ready to come in the game and score the winning. It was a great way to finish off the week.”