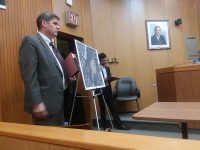 Representatives for the developer of a proposed 92-unit assisted living facility on Zeiss Drive returned last Thursday to the Mount Pleasant Planning Board to pursue a special permit and site plan approval for the project.

Shelbourne Healthcare Development Group, LLC resurfaced last Thursday evening after meeting last year with the town and planning boards regarding their plans for the vacant 10.45-acre parcel that is located in the Office Business (OB) zone.

Since then, the Town Board has amended the OB zone to allow for assisted living facilities with a special use permit, said Pat Cleary, the town’s planning consultant.

“We believe we meet all the requirements for a special permit for the building,” said James Ryan, a principal for the engineering firm John Meyer Consulting who is among the representatives for Shelbourne Healthcare. “I think Mr. Cleary stated that we should provide the board with specific information that we meet all the special permit criteria. So we will be doing that, of course, in our follow-up application.”

The facility will be three stories and will include a memory care unit, Ryan said. Although there will be 92 units, there could be up to 99 residents.

Ryan said despite projections for a relatively low impact on traffic, a traffic study will be completed. The applicant estimates that the project would generate 19 cars during the weekday peak hour and 26 vehicles during the weekend peak hour. He said that the left turn out of the site onto Columbus Avenue could be problematic, with an estimated 51 seconds needed to leave the site. Currently, that intersection is rated at a service level F, Ryan said.

While the zoning calls for a .5 parking spaces per unit, or 46 spaces for the project, Ryan said Shelbourne Healthcare is proposing 60 spots.

The property has a steep grade but the building is being proposed for the lowest point on the property, which should limit disturbance, he said.

“By placing it where we did, we’re avoiding having to blast and (do) an excessive amount of excavation on the property,” Ryan said.

Despite assurances from the applicant’s representatives, the owner of the nearby Rose Hill Shopping Center and his attorney expressed deep concerns about developing the parcel.

“We’re very afraid of this project for a reason,” said attorney Joe Locascio, representing shopping center owner Vincent Castaldo. “The construction is going to be dangerous. There was mention of possible blasting. It’s behind the shopping center, there’s a 30-foot cliff. You always have problems with water and a couple of streams back there.”

He also said that the town code calls for the facility to be within walking distance of a bus line but given the slope and the distance from Columbus Avenue that would be highly unlikely.

“It’s a good use.” Castaldo said. “It’s a bad location for that use and that’s the main problem.”

Planning Board member Joan Lederman said she had concerns that a nearly 100-resident facility would overburden volunteer emergency services. Lederman, a volunteer ambulance corps member herself, said Shelbourne would need to make sure there is enough staff with expertise on hand at all times to address non-emergency health matters.

“These kind of facilities impact emergency services a great deal because I am a volunteer and we go to places like Atrium and we go often and we go there for calls that they should not call an ambulance for,” she said.

Ryan said there will be sufficient staff to handle the minor incidents that can overburden a volunteer service.

He also said that his client would be happy to meet with neighboring property owners to address any concerns.

Board Chairman Michael McLaughlin said there is much work to be done by the applicant.

“We’re early on in the process here,” McLaughlin said. “As mature as (the plans) may look…there’s still a lot of work that needs to be done and they indicated themselves there’s a lot of work still to be done.”