If you’re an art lover, you don’t have to wait until museums reopen to appreciate a series of top-notch work up close.

Head to the new 3.6-mile pedestrian and bike path on the Mario M. Cuomo Bridge, which opened on June 15, and you can take in some fascinating pieces on both the Tarrytown and Nyack sides of the path. It also provides some much-needed exercise for local residents who would like to increase their activity after five months of a pandemic.

The public art installation, which was officially unveiled on July 27, features 10 New York-based artists who were commissioned for the project. Some of the works used reclaimed steel from the old Tappan Zee Bridge that was made available by the New York State Thruway Authority. All the of the art touched upon themes that are connected to the Hudson Valley.

There were more than 100 submissions from artists to be part of the unusual permanent exhibit, and at least 65 artists vied to be commissioned for the 4,000-square-foot mural alone on the Rockland County side, said Kathleen Reckling, project manager for the series and a director at ArtsWestchester.

“It’s really sort of a community-related public art project and I think that’s one of the things that really makes it special, that it comes from the arts community here, and then artists from across the state can submit,” Reckling said. “It’s not always the case when you have a public art project.” 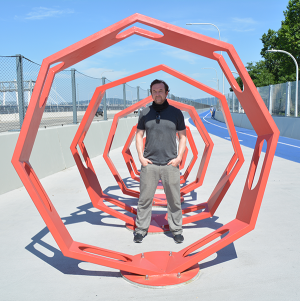 One of the pieces of artwork that incorporates reclaimed steel is Cheryl Wing-Zi Wong’s work “Current” on the Westchester side. It uses 12 steel arches increasing in height from four to 25 feet, mimicking the architecture of the current bridge, Reckling said.

The sculpture provides intriguing shadows that change throughout the daylight hours, she said. Wong added colored LED lights on the arches that responds to the movements of passersby at night.

Thomas Lendvai’s piece, which has on title but was created as a tribute to his father, Reckling said, uses steel from the new and old bridges formed into octagonal forms that represent ripples on the surface of the Hudson River.

There are two types of bike racks on the Westchester portion of the installment. One, “Converging Vistas,” was created by Christopher Flick, whose regular occupation is a welder for the Thruway Authority, Reckling said. His piece incorporates portions of the Palisades to the north and west and the New York City skyline to the south. 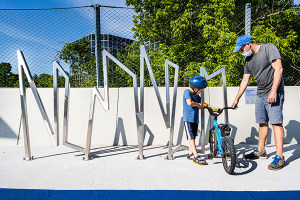 The other is David Greenberg’s “Bike Racks,” which has mooring bollards that signify the Hudson River as a key system of transportation. The oval openings in the bollards accommodate members of the public who want to rest or walk and chain their bikes.

Fitzhugh Karol’s sculpture “Approach” welcome’s visitors to the exhibit on the Rockland side, and also incorporates steel from both the old and new spans. The piece evokes a sense of uplift, progress and momentum, visually anchoring the beginning of the bridge path in Rockland County.

“The thing that was really striking about it is you can see the Bethlehem steel marks and all the markings for 50-plus years,” Reckling said.

The mural, titled “The Flux of Being,” was designed and painted by Chris Soria who received assistance from a team of artists. It is mostly under an overpass on the path, using abstract images of marine and mountain life that represents the biodiversity of the region.

Reckling called the mural “a gateway piece,” because some of it is visible to drivers entering Rockland County.

“It’s colorful and it’s abstract and uses silhouettes of animals and plant life from the Hudson Valley,” Reckling said.

For those who are up to walking or riding some more once crossing the river, there is “Tappan Zee,” by Ilan Averbuch, which includes seven abstract figures carrying a canoe. The sculpture pays tribute to the Native American Lenape tribe and its history along the Hudson. 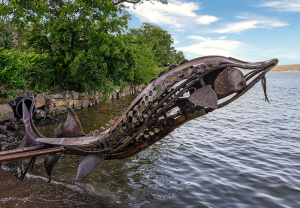 A walk to the river’s edge in Nyack reveals Brooklyn artist Wendy Klemperer’s “Leaping Sturgeon.” Years ago, there had been excessive fishing of the sturgeon, Reckling said, nearly leading to its disappearance from the river. Klemperer’s  steel sturgeon is positioned so it appears to be leaping out of the water to signify te species’ rebirth and the revival of the river, she said.

“When she heard that there was going to be a shared-use path on the new bridge, she started floating the idea around somehow getting the arts involved,” she said. “She’s been, for the organization, a really big proponent of public art for a long time, and increasingly it’s an area we’re engaged in.”

For those who don’t bike there is a welcome center on both sides of the bridge with a parking lot that provides easy access to the exhibit and the path. The Westchester welcome center is on Broadway (Route 9), just north of Route 119. Masks or face coverings are mandatory to visit the artwork and have access to the path.