Skip to content
Business The Examiner
December 8, 2021February 22, 2022 Martin Wilbur Armonk Lions Club
We are part of The Trust Project

Armonk Lions Club leadership must enroll new members this month or face the possibility that its chapter would be forced to fold.

The service organization, which was formed 82 years ago in Armonk, needs at least 11 members to sign up by Dec. 30 or risk going dormant, said Phyllis Padow-Sederbaum, the Armonk Lions Club secretary who also is president of the Armonk Leo’s. She said the district leadership, which helps oversee the local clubs in the region, uses 20 members as a guideline to have an active and functioning organization, although it has exercised some leeway in the past, she said.

If the Lions were no longer to exist, then one of the town’s signature events, the popular fol-de-rol, a four-day country fair typically held in early June at Wampus Brook Park and the Armonk Lions’ only fundraiser of the year, will also be history.

“If we don’t gain membership, okay, we need a minimum of 20 members,” said Padow-Sederbaum, who mentioned the club once had about 35 members. “We really can’t sustain a club, and therefore, fol-de-rol in its current form will fold as well. It’s as simple as that.”

The Armonk Lions held a meeting last Tuesday evening at the Hergenhan Recreation Center to review its strategy to attract new members. President Douglas Martino said he was hopeful that the club could entice the requisite number of new enrollees from the town and neighboring communities by the end of the month to continue operating, and participation is being sought.

“We really appreciate your interest, but we have to emphasize this is not somebody helping out with the fair,” Martino said. “We want members of the Armonk Lions Club and that’s a bigger, broader and more of an act of fundamental commitment that we’re asking for as opposed to – and we really appreciate the effort – but it’s more than just helping out with tasks associated with the fol-de-rol.”

The organization donates all of the thousands of dollars it raises from the fair every year to organizations such as Guiding Eyes for the Blind, Visions, a summer camp for sight- and hearing-impaired youths, the North Castle Citizens Citizen Corps Council (NC4), which operates the town’s emergency shelter, and many other worthy causes. It also contributes to larger humanitarian efforts for the international organization.

Most North Castle residents are likely familiar with the fol-de-rol, which ran for 45 years until COVID-19 interrupted the tradition in 2020 and 2021. However, participation for that one event a year is getting increasingly difficult, said Tony Baratta, a longtime Lion and co-chair of the Fol-de-Rol Team.

He said the club has dwindled to nine members, in large part because people have busy lives with multiple commitments. However, only about six or seven of those members are active, which forces them to do an inordinate amount of work for up to six months prior to the fair.

While the Lions receive help from community members during the four days, it needs assistance in the planning stages as well, he said.

Because so many local families with children attend the fol-de-rol and the affiliated Leo’s have worked with students from H.C. Crittenden Middle School, it was suggested for the club to target residents with school-age children.

The commitment for prospective members includes attending a monthly dinner meeting in Armonk in addition to fol-de-rol, Padow-Sederbaum said. A member may also propose other projects to benefit local and regional organizations.

Baratta mentioned that no one keeps attendance records or tracks how much time a member gives.

“You can give an hour a month; you can give 20 hours a week,” he said. “If you’re motivated by a certain project, we’ll help you with that project.”

To learn more about the Armonk Lions Club and to consider joining, visit www.armonklions.org or visit its Facebook page. 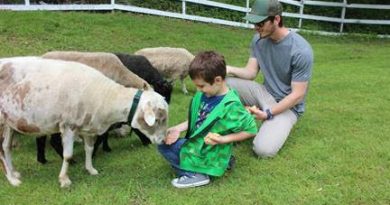