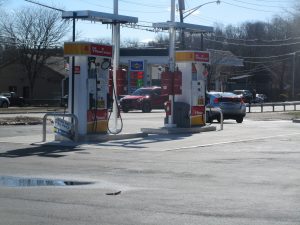 The former Shell gas station at 375 Main St., foreground, and the Sunoco station across the street are at odds after the latter has launched a lawsuit claiming its competitor is operating illegally.

The owners of an Armonk gas station are suing another station across Main Street and various North Castle officials claiming that the town has allowed the business to operate illegally.

An Article 78 was filed Jan. 29 in state Supreme Court on behalf of Zeidan Realty Corp., Vincent Masi and Steven Karl, owners of the Sunoco station at 360 Main St., against the former Shell station at 375 Main St. The business at 375 Main St. is owned collectively by two trusts and several limited liability companies.

Also named as defendants are the town, the North Castle Planning Board, Building Inspector Robert Melillo and Supervisor Michael Schiliro.

The plaintiffs allege that a legal nonconforming use for 375 Main St. was never established because at the time of the station’s construction the infrastructure for the underground tanks was wrongly placed in the town’s sewer and water easement and the state’s right-of-way.

Even if there was a legal nonconforming use, recent alterations were allowed to be made to the 375 Main St. site without a site plan, according to the complaint.  Since the owners of 375 Main St. never obtained approvals for fencing, waste oil tanks and a shed, the property is in violation of town land use laws, the plaintiffs argue. As a result, that should terminate the legal nonconforming use status, the suit reads.

Finally, because business operations ceased for more than six months while alterations were made to the site last year, the former Shell station should lose its legal nonconforming use, the suit contends. The station at 375 Main St. closed late last June and did not reopen before the close of 2019.

The plaintiffs argue they are harmed because of the continued operation of 375 Main St. as a gas station.

Messages left last week for attorney Steven Barshov, who is representing the plaintiffs in the case, were not returned.

North Castle Town Attorney Roland Baroni said the claims regarding loss of the nonconforming use lack validity. The litigation appears to have been filed by Zeidan Realty in an attempt to eliminate its only competitor in Armonk, he said.

“In its simplest terms, what you have are two gasoline service companies thinking they can’t play in the same sandbox,” Baroni said. “That’s really what it is and it’s really unfortunate because the town is caught up in the middle of it.”

Baroni explained that the plaintiffs’ argument on loss of a nonconforming use is based on a decision in Illinois. However, there is no case law in New York to support their point of view, he said.

In North Castle, if a nonconforming use is abandoned for more than six months then it ceases to exist. However, because the owners were actively looking to renovate or remediate the site, then the gas station remains a legal use, Baroni said.

By applying the standards outlined in the litigation, that would mean the Sunoco station at 360 Main St. is operating illegally as well, he said.

“When 360 had to replace its tanks about two years ago, it was closed for 13 months, and it too is a legal nonconforming use and we never attempted, nor did the owners of 375, attempt to argue a theory that their nonconformity had ceased to exist,” Baroni said.

There were several violations at 375 Main St. that its owners have had to rectify. Following a site plan review, the town allowed the station to install new gas lines so it could reopen, but it was with the condition that the owners return with a full site plan within 90 days to redevelop their property, Baroni said.

Work will include redevelopment of the building and rearranging of the gas pump islands with landscaping. It will no longer perform auto repairs.

Baroni said the Sunoco at 360 Main St. also had its request for a temporary restraining order denied by a judge on the basis that there is no irreparable harm other than competition, which is not a valid reason.