Arts & Entertainment The Examiner
November 17, 2022 Martin Wilbur Pleasantville
We are part of The Trust Project

If you go to Arc Stages in Pleasantville this weekend, you may recognize a story with a familiar theme.

The theater is presenting the remaining three performances of “She Loves Me,” a story that has had multiple adaptations on the screen and on the stage.

For director Ann-Ngaire Martin, the story and the music make for a popular combination that drew plenty of actors to audition for the 12 characters in the show, making for a very strong cast for the Community Stage production.

“This is one of those shows that I think you have like a little sweet spot in your heart for it and a lot of actors came out and said ‘I just want to be in it,’ and that’s how we got four ensemble women who are so amazing,” Martin said. “(They said) ‘I don’t have to be the lead. I just want to be in it.’”

The show is based on the original production “Parfumerie.” For those, who may not recognize that title or “She Loves Me,” there have been three on-screen adaptations over the decades, starting in 1940 with “The Shop Around the Corner” starring Jimmy Stewart and Margaret Sullivan, followed by “In the Good Old Summertime” and most recently in 1998 with “You’ve Got Mail.”

Playing the lead, Amalia, is Stacey Bone-Gleason, who directs and teaches at Arc Stages and periodically heads back to the stage to act.

While the story is timeless – Amalia gets hired at a perfumery and she doesn’t know that her pen pal love interest also works there – the music provides everyone in the cast an opportunity to shine, Bone-Gleason said.

“I love the music, I love this piece, I love this role, but I think the best part about this show is the fact that it is such an ensemble, is so beautiful with all the characters in it,” she said.

Martin said that she knew Bone-Gleason could act, but was “floored” when she heard her beautiful soprano voice that is perfectly suited for the role.

The show is enhanced with music from a five-piece band.

Moving back and forth between, teaching, directing and acting allows Bone-Gleason to refresh herself with her different responsibilities and perspectives, which not only rekindled her enthusiasm for acting but makes her better in each of her roles.

“I’ve always said, as soon as I found teaching and directing, I found I had a better sense of myself,” Bone-Gleason said. “I started feeling better about the world of the arts in general, started acting some again, and then it’s vice versa, there are times when you’re teaching non-stop for long time and you start acting and you’re like now I can bring what I’m remembering about acting and the craft to my students because I’m acting as well.”

For Martin, the auditioning and rehearsing for “She Loves Me” emphasizes the best of local theater. There’s a classic story line with great music and enthusiastic actors having fun.

“That’s what community theater is about for me, having people walk in and they say, ‘Let’s do a show together,’” she said.

After opening last Friday, the cast will do three more shows this Friday and Saturday evenings at 8 p.m. and Sunday at 2 p.m. 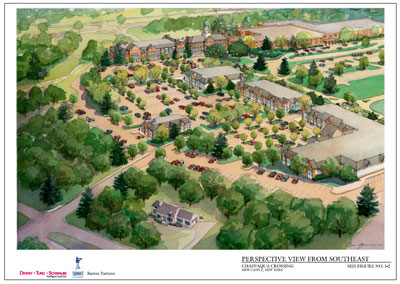