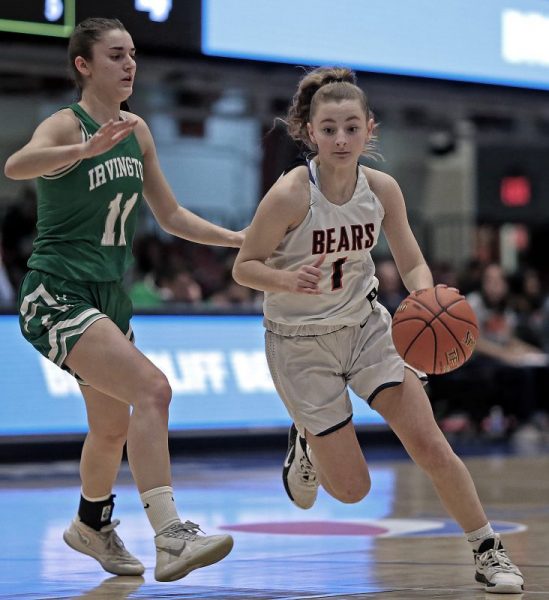 This is the third and final story I’m sending. Not sure when I’ll be sending any others; hopefully sooner than later.

A season that began with high hopes and then a long winning streak ended in major disappointment for the Briarcliff girls’ basketball team.

Forced to compete with best player Alana Lombardi sidelined by injury, the Bears turned out to be no match for the five-time defending sectional champion Irvington Bulldogs, who breezed to a 53-30 rout in last Tuesday night’s Section 1, Class B semifinal playoff game at the Westchester County Center. A nearly 11-and-a-half-minute scoring drought in the first half all but sealed the Bears’ fate.

“We got beat by a better team today and we really didn’t help ourselves on the offensive end,” said Bears head coach Don Hamlin shortly after Irvington had ended Briarcliff’s season for a fourth straight year, this time one round short of the championship game.

The Bears grabbed their only lead of the evening just over 90 seconds after the opening tip when senior guard Kaitlyn Ryan provided an old-fashioned 3-point play that left Irvington trailing 4-1. But Ryan’s basket wound up being the only one the Bears made in the first half.

They missed their next 21 shots from the field, finishing a dismal 1-for-22 over the opening two quarters. When the third quarter began, Briarcliff then missed its first three shots before Dylan Zednik finally ended the streak with a put-back. By then, though, Irvington had built a 21-point cushion.

“We just kept misfiring,” said Hamlin. “I thought we were a little too frenetic offensively. I was just trying to get ‘em to breathe a little bit. Wasn’t very successful in doing that. I mean, they really tried and they were pumped up to play. It was a big deal. We just didn’t play very well on that end.”

The top-seeded Bears threw the ball away on their first two possessions of the night and piled up nine turnovers in the opening quarter. Following the 3-point play from Ryan, fourth-seeded Irvington proceeded to score the game’s next 22 points and opened up a commanding 23-4 advantage with 3:22 left in the half.

Briarcliff’s lengthy scoring drought finally ended when Zednik made a pair of free throws with 2:57 remaining in the second quarter. Freshman Cat Carrafiello, who led the Bears with a mere seven points, added two more foul shots with 36.4 to go, but Briarcliff trailed 25-8 at intermission even with Irvington star center Grace Thybulle spending most of the half on the bench after picking up two quick fouls.

“I just told them to come out and compete,” said Hamlin about the halftime message to his overwhelmed and embarrassed team. “They came out and competed. It’s hard when you don’t really have a go-to scorer, and it kind of showed up here today how much Alana helps us through rough patches.”

Just nine seconds into the third quarter, the Bear’ Julia Dalessandro picked up her third foul as Irvington’s Aine Cleary was scoring a bucket inside. Two free throws from Abby Conklin, who finished with a game-high 15 points, then gave Irvington a 29-8 lead. With Thybulle now back on the court and providing four baskets, the Bulldogs stretched their lead to 23 points before Ryan ended the third quarter with a pair of foul shots.

After scoring just 16 points over the game’s first three quarters, the Bears added 14 more in the final quarter. Junior center Jordan Smith, scoreless heading to the final period, chipped in with two baskets in the first couple of minutes. A runner from the left baseline by Carrafiello with 4:15 to go capped a 6-0 Briarcliff spurt and cut the Irvington lead to 44-25.

But Thybulle then went on a personal 6-0 burst and Nikki May followed with a 3-pointer, giving the Bulldogs, who wound up getting dethroned by Putnam Valley four days later, their largest lead of the game, 28 points. In the final minute, the Bears got a 3-point basket from the right elbow by Caroline Barbalato and a fast-break layup from Ashley Fortunate.

In truth, the Bears, despite an 18-0 start to their season, ceased being a title contender the instant Lombardi severely twisted her right ankle in a home win over Croton back in early February. Without her, they dropped their final two games of the regular season, then struggled to defeat Westlake in the opening round of sectionals.

“Yeah, I’m sure it was devastating,” said Hamlin, asked how tough it was for his star player to conclude her standout career sitting helplessly on the bench. “She tried. She went to therapy, she did everything she could, but it just didn’t respond well. It was one of the worst sprained ankles I’ve ever seen. After that happened, and I looked at her ankle, I really didn’t think she would be back.”