The approved layout consisted of 25,218 square feet of retail and restaurant space (including the existing Westchester Burger space), 276 multi-family dwelling units contained within two separate buildings (160 one-bedroom, 91 two-bedroom and 25 studio) and approximately 745 parking spaces in a multi-level parking structure, including 275 spaces designated to the city for municipal use.

Extensions were given in 2020, 2021 and June 6, 2022 and during the investigation of the three-acre site, situated across from the Westchester Mall, the applicant discovered the water table was at a higher level than when the original approvals were granted.

To avoid having the lower levels of the garage and parking spaces potentially submerged, TB White Plains Apartments LLC, which acquired the project and property in July 2019, requested to raise the grade of the floor elevation of the basement level by two feet, which resulted in several modifications to the overall design.

In lieu of providing park and recreation facilities for the units, TB White Plains Apartments will be contributing $866,500 that the city will use for parks, playgrounds and other recreational purposes, including the acquisition of property.

A public pedestrian walkway will also be constructed from Franklin Ave. to Westchester Ave.

Meanwhile, at last week’s meeting, the council approved a second one-year extension for a development approved at 1 Water St.

No changes have been proposed for the project. Construction of the 22-story, mixed-use building consisting of 301 dwelling units, 1,212 square feet of retail/commercial space and 307 parking spaces is expected to begin within the next year. The office building on the property has already been demolished.

In other council action, agreements were reached with the New York Knicks and New York Rangers.

The Knicks have been participating in an affiliate program with the city since 2016. Wayne Bass, the commissioner of White Plains’ Recreation and Parks Department, stated the benefits of the program include a virtual or live youth basketball clinic, a New York Knick alumnus appearance, access to the Knicks coaching development program, participation in the annual Junior Knicks Affiliate Skills Challenge and access to special events.

The pact with the Rangers involves the hosting of a series of hockey programs at Ebersole Ice Rink through Aug. 21, 2023. 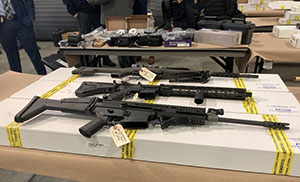 Eleven Charged in Police Raid of More Than 100 Illegal Weapons