More than 250 people filled Peekskill’s Depew Park field to celebrate the city’s 11th annual Juneteenth Freedom Day on  Saturday as local performers were joined by youth groups who proudly strutted their talents throughout the afternoon.

“I thank the City of Peekskill for honoring this day,” King said. “I’ve owned a child care center for over 30 years here in Peekskill and I’ve seen the kids from years ago come back as adults to celebrate this day with me.”

Johnson reminded the crowd of the meaning of Juneteenth.

“Juneteenth commemorates the day in 1865 when enslaved people in Galveston, Texas learned about the Emancipation Proclamation two years after it became law,” he said. “This day is about America’s promise that all men are created equal. We celebrate America’s kept promise.”

Last year President Biden signed legislation making Juneteenth, typically celebrated on June 19, a federal holiday. Since June 19 falls on a Sunday this year, the holiday is being observed on Monday, June 20.

“We have waited as they did in Texas,” said Rev. James Perry, pastor of the Mount Olivet Baptist Church in Peekskill. “We are still waiting. Right now, as a community, we ask you, Lord, for freedom from everything that seeks to hurt us. Let us rejoice today. We know a better day is coming.”

Several times during the celebration Perry chanted out “Ashay! and many responded by repeating the African word that means to come together.

Among the highly talented performers that helped celebrate the day were the X-Factor Drumline and Dancers, the Peekskill City School District Band, the Peekskill City Singers who sang in rich four-part harmony, the Libations, with their energized drummers providing a non-stop beat for dancers, and the Peekskill S.T.A.R.S., a youth dancing group.

Spread out over the field were local food and craft vendors and tables representing about 40 community groups including, schools, churches and local youth organizations.

Several local elected officials were on hand to view and be a part of the celebration as were Valerie Eaton, president of the Peekskill branch of the NAACP, and Peekskill Superintendent of Schools Dr. David Mauricio.

“There are still inequities in our system,” said state Sen. Peter Harckham as he briefly addressed the crowd. “There’s inequities in housing, education and child care for lower-income families. You have to hold us accountable; we have a lot more work to do.”

Many waved the red and blue Juneteenth flag with a white star burst, as well as the black, red and green Pan-African/African American flag.

Waiting to perform was the jazz-funk bass guitar player Richie Goods who, when not on tour, plays regularly at Mount Olivet Baptist Church.

“From the original Juneteenth day until now, we’ve come a long way but history repeats itself,” Goods said. “This day is important particularly so younger people can appreciate our history.”

Adding to that sentiment was Keturah Louise Hadley, president of the Peekskill chapter of the Westchester Black Women’s Political Caucus. The group supports Black women running for elected office.

“Juneteenth is part of our history and represents every person of color,” she said. “We support this day because it’s important to our community.” 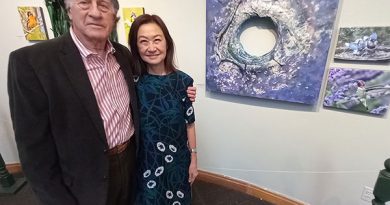