Armonk won’t be left without a supermarket after all.

The North Castle Planning Board unanimously granted final approval to the revised Armonk Square project Wednesday night, the centerpiece of which will be a 20,000-square-foot DeCicco Family Market. In addition to the food store, the mixed use facility totaling about 53,000 square feet, will feature retail shops, restaurants, office space and 10 apartments on the 3.4-acre parcel in the heart of the hamlet’s downtown. There will also be two middle income residence built off site.

Alan Zaretsky, one of the three partners who will build Armonk Square, said the planning board displayed strong leadership in moving ahead with the vote despite warnings by some in the crowd at H.C. Crittenden Middle School that already congested downtown traffic would be further snarled once the project is built.

“As somebody who lives in this town, owns property in this town and is a developer in this town, I’m thrilled because this was the right thing to do,” Zaretsky said moments after the vote.

The partners, who were originally approved in 2008 for a project that included commercial and office space along with 21 apartments but never built it because the market cratered, returned last spring with a plan to include a supermarket shortly after it was announced that CVS was going to replace A&P at the nearby Armonk Shopping Center.

Attorney Anthony Veneziano, the attorney for the applicant, said ground could be broken this fall, with construction commencing right after the first of the year. He expected construction to last nine months, putting the new supermarket’s opening close to a year away.

DeCicco Family Market, which has eight other locations in Westchester, Putnam and Rockland counties, would be allowed to have operating hours between 6 a.m. and 10 p.m. seven days a week, Veneziano said, although the hours would likely be 8 a.m. to 8 p.m. There will be two or three tractor trailers making deliveries Monday through Saturday, probably between 7 and 11 a.m., along with several smaller trucks and vans.

The project was approved following more than two hours of pleas from residents and property owners, some of whom appealed to the board that this could be the last chance to reinvigorate downtown Armonk. Opponents continually questioned whether there was enough parking and the negative impact of more trucks in the area.

Resident Barry Malvin said he’d rather see the town be forced to deal with traffic issues than risk missing an opportunity to help Main Street.

“Don’t let this deal die from analysis,” Malvin implored the board. “Get it done.” 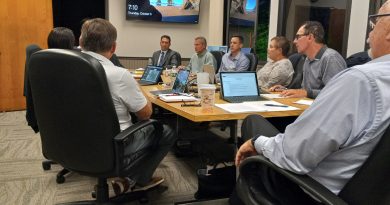