Skip to content
The Northern Westchester Examiner
December 8, 2015 Rick Pezzullo
We are part of The Trust Project

The Democratic majority on the Peekskill Common Council approved a 2016 city budget on December 1 with a 3.6% tax increase, less than three hours before the state deadline.

It took three tries for the council to pass the $37.2 million spending plan after it voted last Monday to exceed the state imposed tax levy cap of .74%. However, Mayor Frank Catalina and Republican councilmen Vincent Vesce and Joe Torres did not participate in the final budget vote last Tuesday after an emergency meeting was called by Deputy Mayor Drew Claxton after 5 p.m.

The special meeting became necessary after the city’s Deputy Corporation Counsel Melissa Ferraro discovered the previous night’s vote was deficient based on an improper motion made by Councilman Darren Rigger.

Notice of the emergency meeting was posted at approximately 7 p.m. by Ferraro on Facebook, a procedure Catalina claimed was not in compliance with the City Charter.

“Neither I nor councilmen Torres or Vesce were contacted by any two other council members, in writing, by phone nor in person, so the provisions of the City Charter and Code have not been complied with,” Catalina stated in the City Hall chambers last Tuesday from the audience microphone before walking out.

“I do not deem Facebook as an official means of notification of the public of important business of this city,” he said. “In discussing this matter with the city’s corporation counsel, there is no question the requirements of the Charter and City Code have not been complied with, thereby making this meeting lawful, valid and binding. I have concluded that this meeting has not been called pursuant to the statutory authority contained in the Charter and constitutes an illegal meeting of the Common Council.”

Nonetheless, Claxton, Rigger and council members Vivian McKenzie and Kathy Talbot continued with the meeting and approved a budget that will cost the average single-family homeowner in the city about $77 more in taxes next year.

If the vote did not occur, City Manager Richard Leins’ tentative budget that carried a 5.9% tax increase would have gone into effect by default, which would have cost residents another $50 next year.

“It’s a balanced budget,” Leins said later in the week. “It’s not the end of the process. It’s definitely a step in the right direction.”

Leins said the council was able to slash the tax increase by not funding a laborer he had proposed for the waterfront and making some “adjustments” in some revenue and expense lines.

The council did go along with Leins’ recommendation to pay its current outstanding balance of $4,278,000 to the New York State Pension system, instead of only its deferred obligation of $360,000 under a previously agreed upon repayment schedule.

Last Monday, in a 5-2 vote, the council voted to exceed the tax cap, with only McKenzie and Talbot opposing. The next vote on the budget, with a 3.59% tax increase, then failed 5-2, with only Claxton and Rigger supporting it.

Vesce contended with only a 3.59% tax hike Peekskill would be starting off with a $1.2 million deficit in 2016, which would likely lead to a double-digit tax increase in 2017.

“You will put the city in fiscal stress,” Vesce said. “The budget is not fiscally sound.”

Catalina argued by the vote on the budget failing, the city automatically would operate next year under Leins’ proposed budget, which Vesce said would only start the city with a $500,000 deficit.

Instead, Rigger made a motion to reconsider the previously defeated vote, and this time it passed 5-2, with only Catalina and Vesce voting no. But, since Rigger had voted to support the budget in the earlier vote, he was not permitted to make the motion for another vote, a situation that forced the council to return the next night.

“The way you have conducted this meeting is totally outrageous,” Catalina told Claxton.

McKenzie defended the Democratic majority’s actions, saying, “This was done to protect our taxpayers to make sure we had a budget in place. I stand by this budget as being the best for the City of Peekskill.” 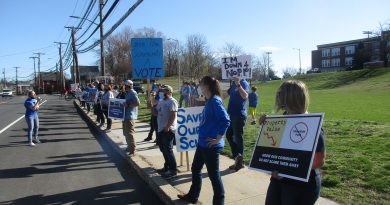 Hen Hud Teacher to Appear on Jeopardy This week