The life of Dixie Kiefer was one of valor and survival against the odds.

It was so intriguing and inspiring that a local Hudson Valley man knew Commodore Kiefer’s story had to be told. A World War II hero, Keefer might not be a subject in school history textbooks, but his life and then sudden death were compelling enough for Yorktown resident David Rocco to co-write a book about with other co-author Don Keith. 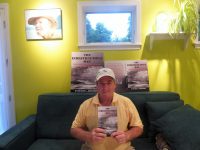 The novel, The Indestructible Man: The True Story of the World War II Hero “Captain Dixie” is now available in paperback on Amazon.

Kiefer’s death is set in local roots when a Navy transport carrying six men crashed in Mt. Beacon adjacent to Putnam County during peacetime travel. Those fallen service members, as well as two other servicemen that died in a 1935 crash, are dubbed the “Mt. Beacon Eight,” including Kiefer, who was 49 when he died.

The book explores the incredible life and service of Kiefer, who was an executive officer, and survived several near deaths experiences while at war. He held a major role in the Battle of the Coral Sea and Battle of Midway–two turning points in WWII–and was the last man off the USS Yorktown before she sank at Midway.

After the ship sank, he pushed a life raft with injured sailors to a rescue ship. Then as the captain of the USS Ticonderoga he survived two kamikaze attacks on the ship less than an hour apart, overseeing counter-attacks for 12 hours despite being severely injured.

Rocco said Kiefer was a “hands on” officer because he was willing to do the same chores his men did.

Rocco said one aspect of research he found most interesting is that one of the men that died in the plane crash was African-American, which was rare because full integration in the Navy didn’t happen until 1948. Kiefer, ahead of his time, treated all men equally, regardless of race or ethnicity, Rocco said.

Rocco also found it remarkable that when Kiefer was awarded the Silver Star Medal for valor, the Secretary of the Navy at the time called him “the indestructible man”–the eventual title of the book–because of his ability to live through dire circumstances.

Rocco, who wanted to be in the Navy, but was turned down because of poor hearing and eyesight and bad knees (he’s had three knee replacements), did the bulk of the research, hunkering down to find every detail and story about Kiefer’s life. He would send that information to Keith, who did the writing. The two men have never met in person or even spoken on the phone, but through countless emails they were able to put a book together in six months. Keith is a best-selling author who accepts story ideas for new novels and was gravitated toward a figure like Kiefer.

Rocco called it gratifying to see his years of research finally turn into a book. He would love to see the book become a movie one day, a push he and his co-author will make. The man Rocco would like to see play Kiefer because of their numerous similarities: Kevin James.

He hopes the other seven men that were killed in the 1935 and 1945 crashes are also recognized.

“I’m just honored because I feel like I was put here for a purpose. I’m passionate, I persevere, I don’t take no for an answer,” Rocco said. “These are stories people need to know.”

Rocco, a retired New York City Housing Authority worker and local activist, will speak Saturday, July 29 at 5 p.m. inside the Putnam History Museum about the Mt. Beacon Eight and Keefer. Admission is $5 for the general public and is free for Putnam Historical Society members. Please RSVP on Eventbrite, or call 845-265-4010.