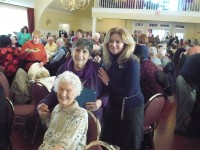 Pointing to her grandmother as the inspiration behind it, Putnam County Executive MaryEllen Odell officially kicked off the “Year of the Senior” last Wednesday during a luncheon event that brought hundreds of senior citizens together.

Odell welcomed more than 300 senior citizens to the Putnam County Golf Course as she declared 2014 to be one in which the county would focus and show appreciation to the seniors that live within Putnam’s borders. With Odell’s grandmother Mae O’Brien turning the ripe age of 100 in April, Odell noted there are many seniors in the county “who have lived a life of history.”

With that in mind, Odell has set up several senior initiatives going forward.

For instance, the county is looking at a different location for a new Cold Spring Friendship Center. Right now, the Butterfield campus is the spot the county would want to put a new senior center at. Hearing from senior citizens, many want to be in the center of town, which the Butterfield property would provide

Legislator Barbara Scuccimarra, who represents that district, said right now seniors go to a nutrition center that’s old and in need of upgrades. Scuccimarra noted Butterfield would be an ideal location. 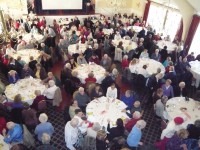 Currently, Scuccimarra said the project has to be granted a zoning change and is in front of the Philipstown planning board. She hopes there’s a decision in the next month and is optimistic going forward.

“They’ve been neglected far too long,” she said. “Not through anybody’s fault but we do have a growing population of seniors and we do need to find a place where they can meet and enjoy.”

One Cold Spring senior, Donna Anderson said at the luncheon a new center would allow seniors to have daily activities like exercise or the use of computers

“It’s awfully important for us to get this thing,” Anderson said. “We’re the first senior group ever in Putnam County and we’re still waiting for our senior center so it’s way past due.

At the Carmel Friendship Center, there are plans to improve the facilities. The county’s architect is currently putting a drawing together based off of seniors’ feedback.

Odell called the current center insufficient to what the seniors want, noting the need for more recreational room.

Increased mobility is also a focus to senior living in Putnam, Odell said.

The county’s transit system will be redesigned and repurposed this year, Odell said, and seniors’ needs would be considered “first and foremost.”

Vincent Tamagna, the director for the county’s Transportation Advisory Council, said in a press release getting seniors to tourism attractions, shopping, medical, and business destinations is a priority.

Office for the Aging director Pat Sheehy said the department continues to work hard to make the county livable for seniors. She noted Putnam has the fastest growing senior population in New York State.

There are also several more events planned for seniors throughout the year, Sheehy said.

The kickoff event even drew a bigger crowd than anticipated. Approximately 200 seniors registered for the luncheon, but more than 300 ended up attending, forcing county staff to improvise on the fly.

Putnam Valley senior Marie Zarcone said she thinks it’s great this year is going to be dedicated to senior citizens. Zarcone is on a senior citizen advisory committee brought together by the county and some of the topics discussed include providing seniors with better lunches and possibly changing the name of the Office for the Aging.