Skip to content
SPORTS
November 14, 2012 Examiner Media
We are part of The Trust Project

The Woodland Falcons emotional roller coaster of a season came to a screeching halt on Friday night at Mahopac High School losing in the Quarterfinals of the New York State Class C Tournament to the Section 9 Champion the O’Neill Raiders 35-18.

This game was played a bit differently for the Falcons. Their head coach Mike Meade and their assistant coach Frank Meade (Mike Meade’s son) were not in attendance because they had the wedding of Mike Meade’s other son which was being held on Saturday.

There were attempts made by the Falcons to get the game moved to either Saturday or Sunday but Section 1 refused to move the game. The best Section 1 could do was to move kickoff to Friday afternoon instead of at night. It doesn’t matter. Meade wasn’t going to risk missing any of his son’s wedding because of the football game.

Falcons’ assistant coach Anthony Fava was in charge of the Falcons on Friday night.

The Raiders didn’t waste any time making a statement in this game. On their first drive of the game they had put together a seven-play 68-yard drive that resulted in a touchdown.

Raiders’ senior running back Jerry Nasi ran the ball into the end zone from nine yards away for the first touchdown of the game. Nasi would end up having one of the best games in his football career. He ran for over 230 yards on the ground and scored several touchdowns. The Raiders were successful on the extra point to make it 7-0 with 9:42 left in the first quarter.

After containing the Falcons on their first offensive possession, the Raiders went back to work taking apart the Falcons defense. Starting on their own 25-yard line they marched down the field quickly thanks in part to the swift and powerful running of Nasi. He scored the Raiders second touchdown of the evening when he raced in from 33 yards away. The Falcons were now facing a 14-0 deficit with just over two minutes left in the quarter.

On the next possession the Falcons would get back into the game. Junior running back Tyrone Barber produced a 26-yard run on the first play of the drive and brought the fans back into the game. The drive most important play was a 4th down and 23 yards to go. Senior quarterback connected with senior wide receiver Dylan Eddy on a pass play, which got the Falcons down to the one-yard line. On the next play Riccio ran the ball in for a touchdown but they failed to make the extra point and now were trailing 14-6.

The Falcons defense led by senior Desean Downey stopped the Raiders on a big fourth down play near midfield a few minutes later. Five plays later Barber used his blazing speed to score a touchdown from 24 yards away. The Falcons missed the extra point and were only two points behind the Raiders 14-12.

What came next was the turning point of the game. After the Falcons have gained momentum by scoring 12-unanswered points the Raiders stopped all their momentum in this game with a single play.

Nasi caught the Falcons kick on his own 5-yard line made several cuts and scampered down the right sideline for a touchdown. The 95-yard kick return for a touchdown followed by an extra point made it 21-12 in favor of the Raiders and that would be your halftime score.

It looked like the second half was going to be a different story for the Falcons by the look of their first possession of the second half that resulted in another touchdown. Barber had a solid kickoff return and the Falcons started their drive very close to midfield. After a successful running play by senior Ray Jackson, sophomore Jonathan Stewart got the ball to the Raiders 24-yard line. Barber took over, taking a hand off from Riccio and ran to the right of his offensive line and he didn’t stop until he was in the end zone. The Falcons attempted a two-point conversion but it failed making the score 21-18. This would be the closest they would get to the Raiders the rest of the game.

Two more touchdowns later the Raiders had victory in their hands and they were advancing to next round of the state tournament. The Falcons season ended a few weeks earlier than they wanted. This talented group of football players really wanted to get to Syracuse and play for a state championship.

The Raiders were victorious because they controlled the offensive line. Their line opened numerous gaps for Nasi and the other runners on the team.

This team has numerous reasons to hold their heads up high. In two seasons Coach Mike Meade has turned the program into a powerhouse that will contend for many future Section 1 Championships.

One of the reasons the Falcons went so far this year was because of their seniors. “

Our seniors are tremendous. Our seniors paved the way for our program over here,” said Fava. “We couldn’t have a better group. We couldn’t name captains all year because we had eight to nine guys that could of taken that leadership every week.”

The future is very bright for Falcons football. 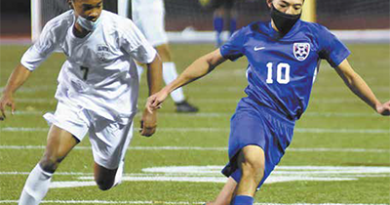 Pleasantville Wins Again by Shutting Out the Tigers