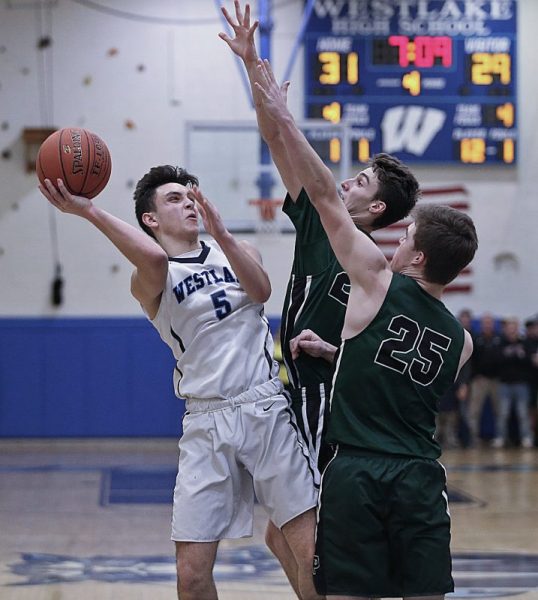 Westlake basketball coach Chad Charney hadn’t even been born yet the last time the Wildcats made it to the semifinals at the Westchester County Center.

Now, forty-two years since Westlake’s last appearance, Charney and the Wildcats are finally headed for the big stage following a thrilling quarterfinal victory.

In front of a standing-room-only crowd, fifth-seeded Westlake defeated No. 13 Pleasantville in a 49-47 nail-biter in the Section 1 Class B quarterfinals on Monday, Feb. 24.

“It’s a program changer,” Charney said of reaching the County Center. “I have seven guys on this team that have never been to a County Center game just to watch as a spectator. I asked them that the other day. The County Center is the best event every year. These guys, now that they’re there, even next year and future groups are going to want it even more.”

“Making the County Center for the first time since 1978 felt extremely special, especially in front of such a large crowd,” said Westlake junior Carter Falkenberg. “It was the largest crowd I’ve ever played in front of, and to have the win come against Pleasantville (was special). The whole team is extremely excited to play at the County Center and we’ve been working so hard for it all season.”

Falkenberg, who scored a game-high 24 points, hit two free throws to give the Wildcats a 45-42 lead with two minutes left in the game.

“We thrive in these tight games because all season long we’ve been playing in close games,” Falkenberg said. “Every game we have won, with the exception of a few, has been close, which has greatly prepared us for these types of situations.”

Aidan Lynch answered for the Panthers to make it a one-point game. The Panthers’ Jonah Sreedhar nailed a corner 3-pointer to put them up 47-45 with 1:14 to go. Joe Ragusa, however, grabbed a big rebound and passed the ball out to Justin Silva, who nailed a corner three to regain the lead for the Wildcats at 48-47 with 40 seconds left.

“Honestly, he didn’t play that much this game because they were beating us down low a little bit,” Charney said of Silva. “Carter and Matt (Martin) are so good and Joey (Ragusa) was playing well on defense, so we didn’t really go with the small lineup until the end. But Silva, to make that three as a sophomore coming off the bench in the fourth quarter, that’s gigantic.”

Lynch came up short on a foul-line jumper on the other end. A jump ball was then called and Westlake gained possession. Matt Martin was fouled and stepped to the line with 7.15 seconds left and made one of two shots. Pleasantville was unable to get a great look at a game-tying or winning basket and the Wildcats stormed the court in celebration

“It’s unbelievable,” Martin said of making the County Center. “We’ve got a great group of guys here and we all work together really well. This is the first year that we really clicked on another level.”

“We had a good look on the last play, but instead of shooting it we tried to pass it one more time not realizing the clock,” Pleasantville coach Bob Jordon said. “As I said in the locker room, with 14- to 17-year-old kids we’re going to make mistakes. But they fought so hard tonight.”

Leadership and execution were keys for the Wildcats late in the fourth quarter.

“We practice tons of end-game situations,” Charney said of why his team thrives down the stretch of close games. “I mean, Carter Falkenberg and Matt Martin, they make clutch plays. And they’ve done it almost all season. They’re special players for sure.”

Westlake built a 15-7 lead after one quarter, but struggled offensively in the second and third quarters. The Wildcats held a 23-21 lead at halftime. Late in the third quarter, the defensive-minded contest was tied at 25-25.

Ragusa added 10 points for Westlake, including a big three late in the fourth quarter. Martin added six points, Silva had five and Greg Cafaro chipped in with four. Falkenberg went 7 of 8 from the foul line in the fourth.

It was an up and down season for Pleasantville (9-13), which opened the regular season 5-0 but went 3-12 the rest of the way. The Panthers, however, pulled off a resounding 62-42 upset of fourth-seeded Palisade Prep in the opening round on the road.

“The second half of the season was kind of rough, but most of these games were three to five, maybe seven-point defeats,” Jordon said. “We try to look at that as four possessions. Four possessions where we turn the ball over or didn’t get a good look at the basket. So what we really tried to focus on going into the Palisade Prep game was to eliminate those and give us some more opportunities to win. It worked last week, but it just didn’t pay off at the end today.”

For the Wildcats, there’s a nothing-to-lose attitude heading to the County Center.

“The mindset is getting to the section final and a section championship,” Martin said. “We’re not done yet.”

Westlake also achieved a 16-win season for the first time since 1991.

“County Center, it’s a great experience for us, but obviously we’re going to try to win the game,” Charney said. “They’re very good (Hastings). They’re super talented and big and they have a little bit of everything. But we have nothing to lose at this point.”