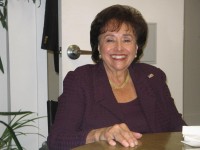 It’s time to move past questioning the existence of climate change and begin debating the best way to combat the drastic and well-documented change in the world’s climatic patterns. That is why I am a cosponsor of the Green New Deal Resolution.

The resolution proposes bold, common-sense goals, including investing in infrastructure, upgrading power grids, expanding clean manufacturing, overhauling transportation systems, and restoring ecosystems. Implemented in partnership with local communities, businesses, workers, and experts, the Green New Deal would transition the U.S. to a sustainable economy that expands financial security for all Americans, especially the most vulnerable among us, and promotes the health and safety of all communities.

The recent National Climate Assessment presented a grim picture of the future we will face if the United States continues on its current path. According to the report, “Without substantial and sustained global mitigation and regional adaptation efforts, climate change is expected to cause growing losses to American infrastructure and property and impede the rate of economic growth over this century.” Even with the expansion of adaptation efforts in recent years, “they do not yet approach the scale considered necessary to avoid substantial damages to the economy, environment, and human health over the coming decades.”

Already we are seeing the consequences of inadequate action: more frequent billion-dollar disaster events, deteriorating infrastructure, increasing food and water insecurity, and displaced wildlife. According to NASA, 2018 was the fourth-warmest year ever recorded, meaning that 18 of the 19 warmest years on record have occurred since 2001.

Rep. Nita Lowey, a Democrat, represents New York’s 17th congressional district and is the chairwoman of the House Appropriations Committee.