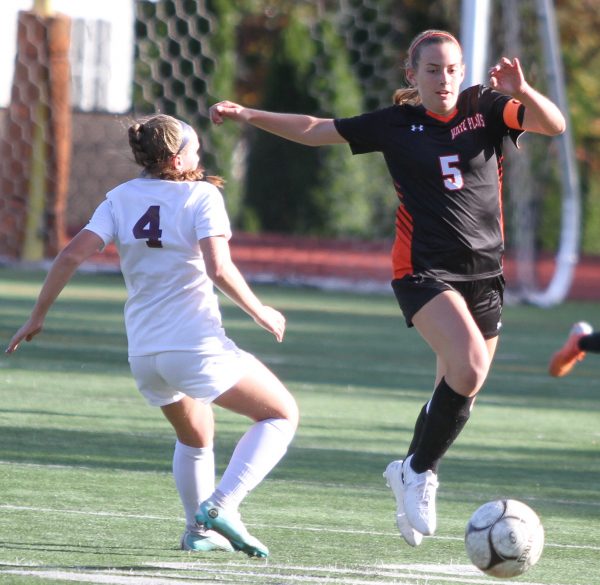 White Plains sophomore Julieth Valesquez, who netted two goals, got the Tigers off to a fast start by scoring less than a minute into the game.

“Right before the whistle blew, we said that we need to put this game away quick,” White Plains coach Meaghan Chase said. “We need to score quick and they did it. They listened.”

With four minutes left in the first half, senior Isabel Saville sent in a cross off the Ossining goalie and Valesquez finished on the rebound. The Tigers led 2-0 at halftime.

Ossining came out on the aggressive to start the second half but the Tigers’ defense buckled down to keep them off the board. Katie McAteer, a junior, headed the ball out of danger on a corner five minutes into the second half.

“We actually have one of our key defensive players (Charlotte Saville) out right now with a bad injury,” Chase said. “Katie moved back to the center back position not really having a lot of experience. She just dominated.”

Sophomore Alexa Galligani gave White Plains an insurance goal when she deposited the ball into the top right corner of the net midway through the second half. McAteer had the assist.

Keren Hazi, a senior goalie, made eight saves in net.

It was the Tigers’ strongest offensive output of the season. Their other two wins, against Arlington B and Ursuline, were both by 1-0 scores.

“This was a good boost for the girls,” Chase said. “This is good for our confidence.”

“Early on in the season, it was a good game to play because they’re so advanced,” Chase said. “We took a lot away from it. We did film and they were watching the game. Moving forward, we have a lot that we know we can work on in practice and in games. We were happy with the overall performance because [Mahopac] is such a tough team. They have a really good reputation. The girls knew that it was very early in the season and we still have a lot to work on.

The Tigers fell to rival Mamaroneck 1-0 at home last Friday to drop their record to 3-3.

White Plains next takes the field when they welcome league opponent Horace Greeley for a 4:30 p.m. game on Sept. 24. They then travel to SUNY Purchase to take on Port Chester in another league game at 3:45 p.m., Sept. 26.

“We played Ossining early on last season and we tied them,” Chase said. “To come out right away with this win, it looks really good for us. I’m really hopeful for this season. Our biggest competitor in our league is Greeley and we lost 1-0 (in the first meeting on Sept. 5). We’re looking forward to playing them again.”