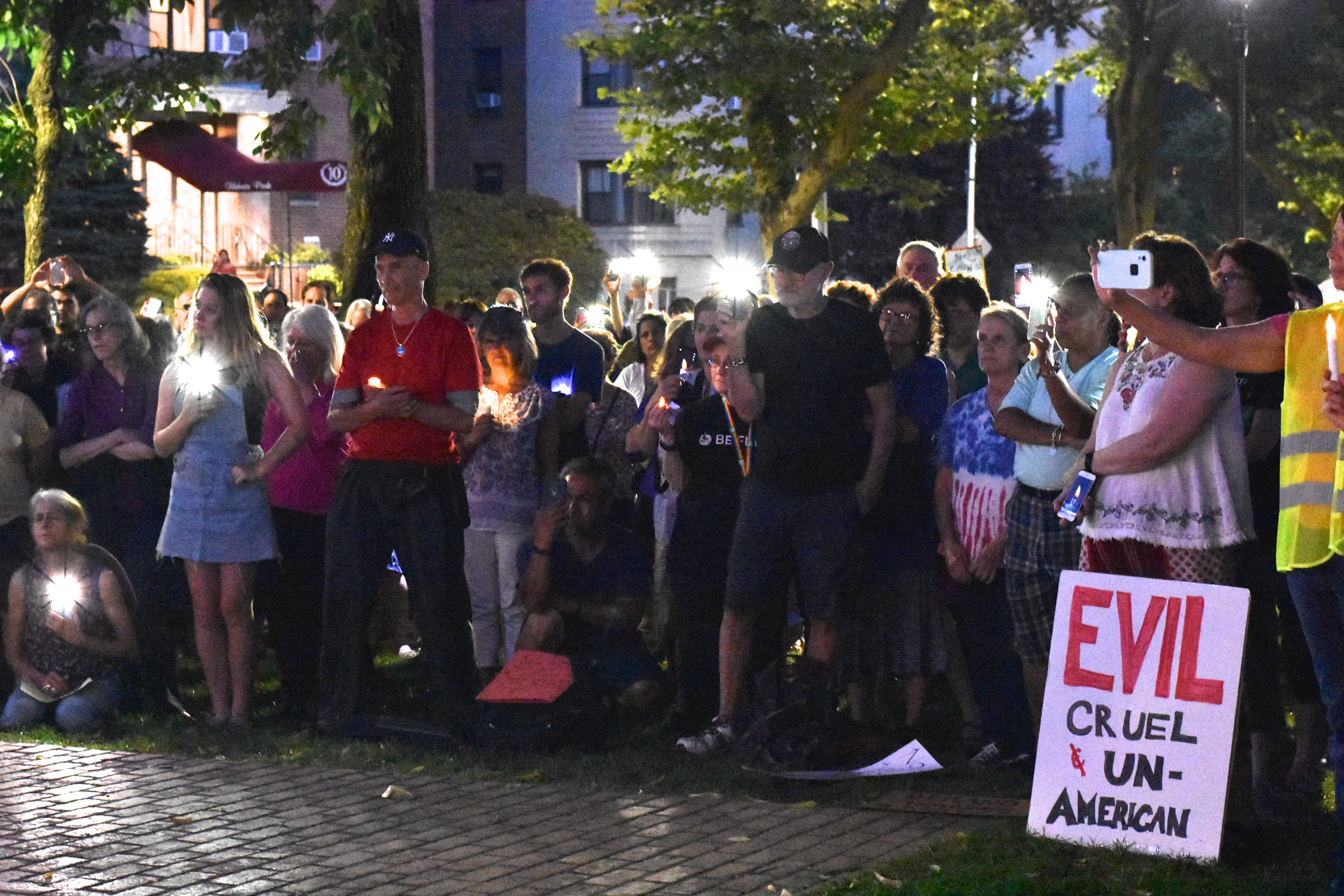 Armed with homemade signs and electronic candles, about 300 people gathered in Tibbets Park on Friday for White Plains’ Lights for Liberty vigil to protest inhumane conditions at US detention centers and to stand in solidarity with those in fear of deportation.

The vigil was one of over 600 that took place around the world, less than two days before ICE raids were anticipated to begin. The event included live music and testimonials from members of the community, as well as statements from a number of politicians.

Congresswoman Nita Lowey (D-Harrison), spoke about plans to visit Homestead Detention Center in Miami, which holds around 2,500 children. She offered support for immigrants and spoke out against the “dangerous atrocities happening in our backyard.”

“Migrants who have crossed our border, desperate for a better, safe life for themselves and their children, face dangerous overcrowding and prolonged detention,” Lowey said. “Holding facilities lack beds, showers, enough food and clean water, and diapers for babies.”

Lowey shared some of what she has done and plans to do to help ensure better conditions for those held at the border. She criticized the inhumane treatment toward those at the border and to immigrants throughout the country.

“These are families, these are children,” Lowey said. “We have to make sure that they have the opportunity that our forefathers and mothers had seeking a life here in the United States of America.”

Tom Roach, Mayor of White Plains, applauded his city for coming together to support one another, calling White Plains the “First Amendment Capital of Westchester County.”

After explaining the work he has to done to help protect undocumented immigrants in White Plains, he urged the hundreds in the audience to continue to support their neighbors and to never stop fighting for them.

“We need to fight to protect the rights of everyone,” Roach said. “Immigrants, people who are here already, and people who seek asylum. They seek asylum, which is recognized throughout the world. They need to be treated with dignity and that is not happening at our borders and it’s a shame on all of us.”

“We who have voices will raise our voices, and we will say, ‘Close the camps,’” Stewart-Cousins yelled, inspiring a “Close the camps” chant that resounded for minutes.

Stewart-Cousins criticized politicians for sacrificing living conditions for profits, saying that we should all be angry and should be a voice for the voiceless, especially now.

“On the eve of a constant sort of terror, we’re reminded that there is an insult to human dignity happening on the border, and everywhere they can decide money is more important than making sure human beings are treated humanely,” said Stewart-Cousins.

Congressman Eliot Engel (D-Bronx, Westchester) visited one of these detention centers in Texas, and placed blame on one particular individual, Donald Trump.

The evening closed with a prayer led by Father Gawain de Leeuw of St. Bartholomew’s Church and Brother Luis Enrique Hernández Rivera, and a song led by Maria and Michael Hood of White Plains. They sang “We Shall Overcome,” an anthem of the Civil Rights Movement with the last verse sung in Spanish.

“The current situation faced by this community is horrendous,” said MC and Translator Evelyn Santiago. “Though many of us are politically active, this is not a partisan issue. It is a humanitarian issue. We believe in the basic goodness of the American people, who refuse to bear witness to state-sanctioned child abuse and human rights violations that are occurring under the current administration.”

As an ESL teacher in the White Plains Public Schools, Santiago is often reminded that any one of the children mistreated in these detention camps could be her own biological child or a student in her classroom.

Santiago has noticed parents afraid to come to school or work, or to their places of worship. Her students she said, are often afraid that their parents could be taken from them while they are at school.

“The Lights for Liberty vigil reminded us that the word ‘immigrants’ is not some impersonal political term,” Santiago said. “These are people. These people are our family, friends, coworkers, neighbors. For me, these are children in my community and in my classroom.”

Santiago was also one of the organizers of the event, along with Jenny Bernhard and Elizabeth Scafidi. The three wanted to do this event to bring the community together and show their support for their neighbors and to stand together and denounce the policies of the current administration, Bernhard said. “Kelly Marx, White Plains High School student and activist from March for Our Lives was also an organizer for this event.  Her input was instrumental in making the vigil a success!”Santiago said.

The organizers also wanted to note that attendants came from all over Westchester County, not just from White Plains, and may have held different political views, but came to together to protest this issue of morality.

In her opening statements Santiago said to the gathered crowd: “We are here to speak up against the inhumane conditions that currently exist in detention centers. We condemn any system that allows children to sleep on cold, concrete floors, to be deprived of basic human contact, to be deprived of the care of a loving adult, to be torn from the security of their parents, to be denied access to basic hygiene, and to be deliberately emotionally traumatized by the current administration. And we are here to make several demands of our government right now.” Santiago asked the crowd to repeat after her: “We the people of the United States stand up for the Constitutional and International Human Rights of every adult and every child detained at or within our borders. We demand (1) That every human being in detention be treated with dignity and respect. (2) That all separated children be reunited with their parents. (3) And, we want this administration to close the camps.”

“We are all thrilled that this event went so well and continues to galvanize unity within our community,” Bernhard said. “The power of the First Amendment was alive and well in the city of White Plains Friday night as politicians, immigrants, activists, and county residents came together to rise up and demand the same thing: close the camps.”