Skip to content
The White Plains Examiner
October 24, 2018 Pat Casey
We are part of The Trust Project

White Plains judge Elizabeth Schollenberger filed a lawsuit against the state court system Tuesday, claiming she was discriminated against and humiliated by employees of the court.

The suit is filed under the Americans with Disabilities Act, the New York State Human Rights Law and the Rehab Act.

Judge Schollenberger had been suspended of her duties due to issues related to her health and was placed on forced leave after appointment for 10 years to the White Plains court. She has been on leave for 16 months.

The lawsuit, which names Lawrence K. Marks, Chief Administrator, New York State Unified Court System, said he suspended Schollenberger because he caved to demands of employees at the White Plains Courthouse. The suit claims those employees were driven by irrational phobia in their demand to have her removed and that there were political issues associated with her appointment, which were highlighted in a nasty news story aimed at causing the judge humiliation and that actions by court employees such as wearing yellow rubber gloves and hazmat suits in her presence were also done to cause her humiliation.

Schollenberger is diagnosed with obesity, pulmonary hypertension, chronic obstructive pulmonary disease, and immune thrombocytopenia and other health issues that require her to use a walker for mobility as well as oxygen. Her prescribed medications cause stress to her gastrointestinal system, requiring her to have quick access to restrooms.

According to the suit, Schollenberger was not given a key to an accessible restroom in a timely manner and the court employees took an excessive amount of time to install handrails in courtrooms behind the bench to aid in climbing the stairs to the judge’s seat.

“The ADA and other disability discrimination laws are intended to foster dialogue and restraint, so that a disabled person is not shut out of a public accommodation or suspended from doing her job without a discussion and examination of whether she can do her job with a reasonable accommodation,” Anthony Consiglio one of Schollenberger’s attorneys said. “That did not happen here.”

Schollenberger, who draws a $187,200 annual salary, said there was no discussion about her health issues before her suspension. 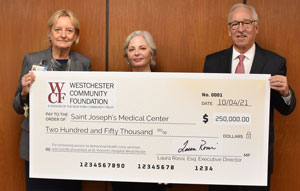