A portion of Route 119 in White Plains will soon be renamed the “Detective Michael Perry Memorial Highway,” as legislation to honor the police officer and Yorktown resident who died in the line of duty last year was signed into law Thursday by Governor Cuomo.

Perry, a member of the White Plains Police Department for seven years, suffered a heart attack on June 12, 2010 after chasing down and arresting a man suspected of robbing Macy’s Department Store at the Galleria Mall. While booking the suspect, Perry began having chest pains and was taken to White Plains Hospital, where he was declared dead.

The legislation renaming the portion of the highway, running from its intersections with Route 100 to Main Street, was sponsored by Greg Ball (R-40) in the Senate and Bob Castelli (R-89) in the Assembly.

“I am gratified that our Governor has seen fit to honor Detective Perry along with myself and all of those who respect both his service, and sacrifice,” Castelli, a 22-year New York State Police veteran, said in a press release. “It is a small testament to a brave man’s actions, and is indicative of the kind of courage displayed by police officers every day in our society.”

Ball said, “Dedicating this highway to Michael is the least we can do to honor his memory and thank his family for their sacrifice.”

Perry, who had previously served with the New York City DEP Police, was posthumously promoted to Police Detective. There will be a ceremony designating the highway sometime later this year, Castelli said. 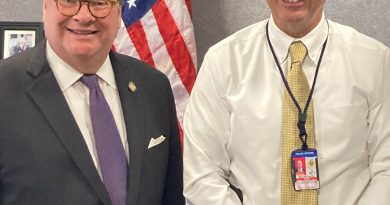