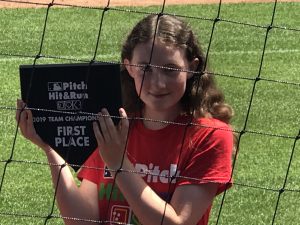 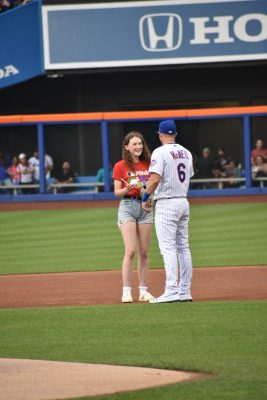 The White Plains resident and avid Mets fan already won a local competition in May and then a sectional contest earlier this month to advance to Saturday’s special event at Citi Field. The top three scores in each division age group out of all 30 MLB team champions will advance to the national finals. Those results will be announced live on the MLB Network on June 24.

National finalists will receive an all-expense paid trip to MLB All-Star Week; the finalists will compete on-field prior to shagging fly balls during the Home Run Derby.

As part of Saturday’s festivities, before the Mets-Cardinals game at Citi Field, O’Donnell met Jeff McNeil, an infielder for the Mets.

“When they called my name I was both shocked and excited,” O’Donnell said of winning first-place. “I was so happy to get this far. I’ve been a Mets fan ever since I was born. I’ve been working hard and want to thank all my coaches.”

In addition to playing softball for the Scarsdale Middle School team and in the White Plains Little League, O’Donnell also stars for the Westchester Heat, a tournament travel team affiliated with the A-Game Sports facility in New Rochelle.

Eric Hosmer is one of several current and former Major League players who succeeded in the contest as kids. The San Diego Padre first baseman was the first Hit Pitch & Run National Finalist to make it to the Major Leagues, having competed in 1998 in the finals hosted in Denver, Co. Participants in Hit Pitch & Run compete in either the baseball division or softball division.