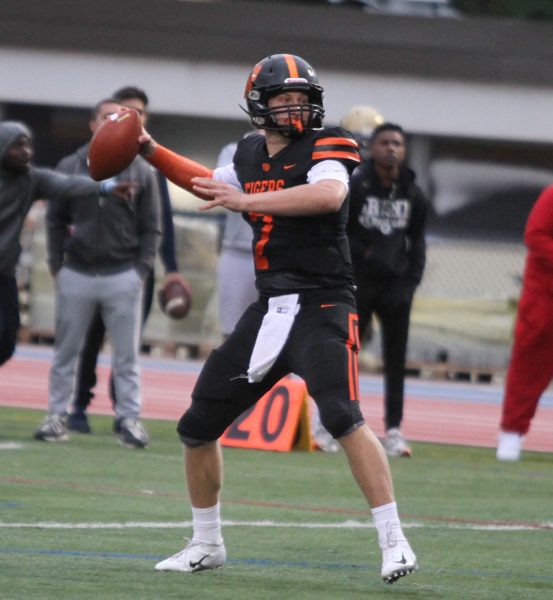 White Plains found themselves in a difficult situation late in the first half of their Week 3 contest with Spring Valley. The Tigers were backed up inside their own 10 while clinging to a one-touchdown lead.

It was White Plains’ air attack that set up a pivotal score. Senior quarterback Ben Finkel found fellow senior Josiah Harris and he sprinted up the left sideline on a 77-yard reception to get the Tigers down to Spring Valley’s 6. A few plays later, Finkel scored from three yards out and Christian Young made the two-point conversion to send the Tigers into halftime up by two touchdowns.

White Plains went on to pull off a thrilling 35-21 road win over host Spring Valley last Friday night to move to 3-0.

“That pass to Josiah near the end of the first half was a huge turning point for us,” Finkel said. “It had been a bit of a shootout with Spring Valley making big plays on special teams. Having the long play to Josiah really helped us swing the momentum of the game in our favor. The resulting touchdown gave us a little bit of a cushion going into the half which was big momentum wise.”

Finkel, who threw for 211 yards in the first half alone, finished 19 of 33 on pass attempts for 313 yards and three passing touchdowns. He also ran for a touchdown. Harris had eight catches for 129 yards and two scores. Elijah Pierre caught five passes for 132 yards and a touchdown.

The Tigers took an early first quarter lead when Finkel hit Harris on a screen pass for a 10-yard touchdown. But Spring Valley returned the ensuing kickoff to the 29 and they later scored to tie the game up.

After converting a fourth down in Spring Valley territory on their next possession, Finkel fired a 19-yard touchdown pass to Harris. The Tigers led 14-7.

“Our offensive line did an amazing job giving us time, which allowed us to do so well in the first half through the air,” Finkel said. “Along with the receivers being great play makers, the combination made us very dynamic.”

But Spring Valley answered again when Jaquan Chambers returned the kickoff 90 yards for a touchdown to tie the game at 14-14.

White Plains responded when a number of players contributed to an eventual touchdown. Caleb Gillens ran a short kickoff to the Spring Valley 46. Finkel found Pierre on a pass to get to the 30. Chris McGuire then broke multiple tackles after a catch to get to the 6 and Young scored to give White Plains a 20-14 lead.

“I think a huge key for us in the first half was our mental preparation,” Finkel said. “We knew it was going to be a battle so we all made sure we knew our keys, reads and blocks so we could come out strong. The O-line handled the overload blitzes beautifully which allowed us to get the balls into the receivers’ hands and let them do their thing.”

White Plains then received the touchdown run from Finkel and ensuing two-point conversion run by Young to go into halftime leading 28-14.

After a scoreless third quarter, Spring Valley threatened to score early in the fourth but Harris’ interception at the 2-yard line nullified that.

With four minutes left in the game, Finkel sent a high pass to a wide-open Pierre, who caught it and did the rest, jetting 83 yards for the insurance touchdown.

“Our success against Spring Valley really came down to our focus and togetherness,” Finkel said. “We really played as a team and family and that’s what helped us stay together till the end and thrive.”

Spring Valley scored once more with under two minutes to play.

White Plains has a tough Week 4 match-up on its hands when it travels north to 2-1 Arlington for a 6 p.m. game on Friday night.

“Arlington is going to be a huge game,” Finkel said. “They’re a great team and we’re going to have to be disciplined and focus on the little things this week. Preparedness is key for us. We’re all really excited for the hard work from this offseason to be paying off and we’re just looking forward to keeping it going and having fun.”