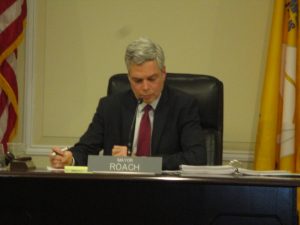 The White Plains Common Council last week approved a major push to increase the use of solar power in the city.

The Council voted unanimously on Feb. 3 to create a community solar program.

“This is something we wanted to move forward for quite a while,” Mayor Tom Roach said last week. Roach said it would not make sense for the city to generate solar power for itself because it receives its power from the New York Power Authority at a low rate.

“This is a real step forward,” Roach said. “We are in a climate crisis and we need strong measures not half measures.”

Under the new program solar panels will be installed at eight city-owned properties. The city expects to generate up to six megawatts of power annually, which would be a tripling of the total current commercial and residential solar production in White Plains. According to the city, in addition to environmental benefits, the program will reduce energy costs for residents and businesses and generate additional revenue for the city through the leasing of city sites.

The community solar model produces solar energy that goes back to the grid and allows residents who enroll in the program to receive a credit on their bill every month. “This costs nothing, all residents have to do is sign up and they receive a credit,” Roach said. The program equates to a reduction of 46,400 tons of carbon dioxide, which is equivalent to removing 8,900 passenger cars from the road, according to the city.

At Roach’s request, the Department of Public Works, in conjunction with New York Power Authority, prepared a Request for Proposals for leasing municipal properties and solicited more than 100 qualified developers. The NYPA serves as a consultant on the project.

The Common Council agreed to enter into a multi-year agreement with Distributed Solar Projects LLC to establish the program in conjunction with Con Edison.

The city is estimating it will receive $960,000 in annual revenue for 25 years. According to the city, funds generated by the program would be used to advance additional sustainability initiatives, facilities and infrastructure.

The city expects the final completion date for all sites will be March 2021.

Council President Nadine Hunt-Robinson expressed her support for community solar last week. “I’m proud of our leadership,” she said. “We have always been a leader with respect to sustainability.”