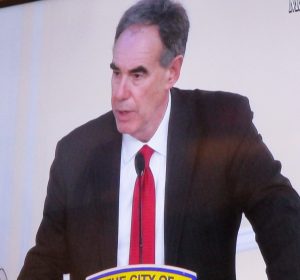 Michael Zarin, an attorney representing the developer of the 1133 Westchester Ave. site addressed the White Plains Common Council on May 6.

The White Plains Common Council voted 6-1 to approve “The Flats,” which will create 303 apartments at 1133 Westchester Ave.

The joint venture of the NRP Group and the RPW Group will create the housing in the same complex that already has a commercial area, which includes a day care center and other businesses.

The developers received a zoning map amendment and site plan approval from the Common Council to overlay the Planned Campus Development District on the site.

There will be one, two and three bedroom apartments spread through the three proposed apartment buildings. An outdoor swimming pool and fitness center are part of the plan.

The partners hope to begin construction in 2020.

At last week’s meeting, Councilwoman Milagros Lecuona asked why a full environmental review under SEQR was not done for the project since the property has steep slopes and wetlands. Commissioner of Planning Christopher Gomez said “a significant environmental” assessment form was filed with the city by the developer. The project did not rise to the level of a greater environmental review because it met the requirements of the zoning for the site, he said.

Lecuona asked Michael Zarin, an attorney representing the developer, what it was planning for the future of the large site. The issue was brought up during the recently closed public hearing, she said and more explanation was needed to be provided by the developer. A moratorium should be created by the Council for the property until the city understands the impact of the new apartment buildings, Lecuona said. Zarin said his client analyzed “how much other potential space would be available” as required by the Master Plan. Future development would require additional approvals from the city, Zarin said.

Krolian said he was concerned that the project might not be successful because it would be located in a remote area of White Plains. If it did not work, he said there should be a moratorium on future development of the site.

Council President John Martin supported the project. “This proposal is an appropriate use of the Planned Campus Development District,” he said. “It’s a good mix of residential on property that didn’t have residential before.”