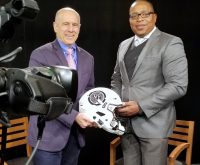 Vorperian noted, “Exciting news for Westchester football fans to see gridiron action. Could next season’s NY Giant or NY Jet be playing for the Streets?”

The Streets Inaugural home opener will be Friday, Apr. 19 at the Westchester County Center, against the legendary Orlando Predators. Beyond The Game episodes are posted at www.wpcommunitymedia.org.