Skip to content
SPORTS
October 9, 2012October 10, 2012 Examiner Media
We are part of The Trust Project

There is something special taking place with the White Plains boys varsity soccer team this fall. After two big wins last week over Mamaroneck and the Keio Academy the Tigers only have a handful of games left to play before the sectional tournament begins towards the end of this month.

The Tigers beat archrival Mamaroneck in a thrilling 2-1 overtime victory. Mamaroneck was undefeated entering the match. On Saturday the Tigers took a very short bus ride north to play Keio.

It was a very long day for a lot of members of the Tigers soccer squad. They had the S.A.T.’s on Saturday morning, which pushed the start of the game two hours later then originally scheduled.

During the first 40 minutes of play the Tigers didn’t look like a team that entered the game with a 8-1-1 record. They were having some severe defensive match-up problems and weren’t controlling a lot of balls up for grabs in the center of the field. This allowed Keio to be able fire off numerous shots on the Tigers goaltender Alejandro Romero.

Romero played out of his body almost with the way he was saving shots versus Keio during the first half. Each save he made seemed more fascinating than the other. Romero is a goalie that isn’t afraid to leave the goalie box to challenge an offensive player who is trying to score on him. The Tigers without Romero could have been down at least three goals at halftime instead of being tied 0-0.

“I thought we played poorly in the first half to be honest with you,” said Tigers head coach Marcel Galligani when the game was over. “I thought we were a little selfish on the ball. We weren’t moving the ball well enough. More important than anything, the guys weren’t moving into position to receive the ball where we needed it to be. We made the adjustments at halftime. We spoke about it and we came out in the second half and showed the quality of soccer we’re capable of playing.”

Galligani credited Romero as being one of the key reasons the Tigers were successful on Saturday and so far this fall.

“His job is just to read balls off his back line and when necessary come off his back line and win the ball,” said Galligani about the aggressive play of Romero. “He was tremendous in the first half. Alejandro matured so much in the last year. He has so much confidence going into this year. He’s a big piece of what we’re doing.”

In the second half this game was a completely different story. A few minutes Shiloh Alexander the silent assassin on the soccer field who is one of the team’s leading scorers this season headed a ball from a Edgar Martinez kick to give the Tigers a 1-0 advantage.

About 15 minutes later the Tigers went up 2-0 when Daniel Guerra-Meija who came off the bench score a few minutes earlier found the back of the net with his shot. Derlis Zayas, who played a terrific all-around game for the Tigers, assisted him on the goal. Zayas completed numerous tasks and finished plays that don’t show up on a box score.

The Tigers final two goals were scored by Martinez. Camillo Vargas assisted on one of Martinez’s goals.

During the second half the Tigers offense did wake up and light up the scoreboard but it should be well noted that defensemen Daniel Murillo played a huge part in this victory.

Murillo is more or less the centerfielder of the soccer defense. Where ever there is trouble Murillo was seen clearing the ball. Murillo has one of the strongest legs of the team. Many of his goal kicks flew over the centerline of the field, which aided the Tigers offense.

After the game Galligani the constant teacher whether it be on the soccer or baseball fields went over with his squad the areas of the game that he needs them to improve on before the sectional tournament.

He emphasized to his team that he likes players who do the little but important things on the soccer field that don’t show up in a game box score. Winning and controlling the center balls is one of the areas in which Galligani wants to see his team be more assertive. If a team can control more balls at the center of field it will allow the Tigers to keep the ball near their opponents’ goal and remove some stress off the team’s defense and goalie.

Zayas talked after the Keio match on how strong the team chemistry is and how the Tigers are a very focused team that knows the importance of every game.

“The team chemistry is very high. We’re a family. We’re brothers. We come together, we lose together, we win together and that’s how it should be,” said Zayas. “These games are very important because we don’t want to lose now getting close to sectionals. We don’t want a let down. We want to keep the intensity high and keep winning.”

The Tigers have two important home games this week. On Wednesday they will take on Scarsdale and two days later the Tigers will face New Rochelle. 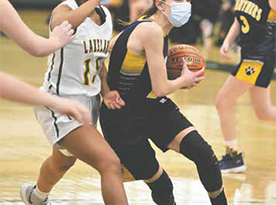