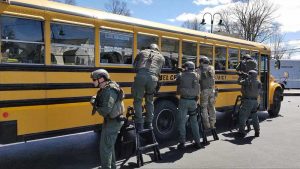 When crisis strikes in Putnam, there is a group of specially-trained individuals ready to spring into action.

The Putnam County Emergency Response Team is made up of 25 law enforcement members hailing from the sheriff’s department and Carmel and Kent police departments, plus negotiators.

“We don’t really know a lot about the ERT team, but lately in the last couple of months, thank God you guys are there to help with specific dangerous situations,” said Legislator Neal Sullivan, R-Mahopac, during the county’s Feb. 11 Protective Services Committee meeting.

“The team is primarily funded through a grant from Homeland Security, which covers roughly half of our training,” explained McManus.

Dearman added that the county allocates another $35,000 for equipment, and $10,000 to reimburse the towns of Carmel and Kent for callouts from those police departments to cover crises in other jurisdictions.

The team is called out, on average, four times per year, according to McManus. “A request for the team can be made by anyone through any of the departments,” he explained.

He said once a request is made and ERT leaders are brought up to speed on a developing situation, the decision is made as to whether a response from the team is warranted .

“If there’s an armed, barricaded subject, if there’s a barricaded EDP (emotionally disturbed person) in the house who wants to hurt himself or someone else, that certainly would constitute a response from the team,” said McManus. “Of course, any hostage situation or any bomb threat – anything where there’s an imminent threat of violence against the people.”

Depending on the type threat, a request is sent out to all team members and, similar to volunteer firefighters, anyone who is available may spring into action. However, since not all members have “take-home” vehicles and may first need to stop at the station, and because they’re all on different schedules, not every team member responds to every event.

And when ERT members arrive at the scene of an incident, they work alongside whichever law enforcement department is in charge.

“We’re a tool to be utilized by the department that calls us out,” said Dearman. “So if the incident was in Carmel, either the chief or one of his designees would be incident commander. We don’t just get to  go off and do what we want. We have to work within the jurisdiction we’re in.”

This collaboration began about 15 years ago, when the team was formed.

“We were sharing services before it was politically cool to say ‘sharing services,’” said Dearman. “Because we know no one department could man and equip one team together. We all got together and did it together.”

ERT members train once a month for eight hours, either at the Paladin Center or the county’s fire training center, at shooting ranges in East Fishkill and Westchester County, and even at local temples and schools to practice movement.

“The temples are really happy,” said McManus. “They specifically asked us to go up there, and in light of everything that’s going on nationally and internationally, it’s good practice for us and hopefully that makes them feel better that we have a little better understanding of the inside of their structures.”