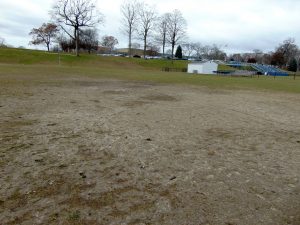 This field at Westlake High School and Westlake Middle School marred by compacted soil with patchy grass is one of the Mount Pleasant’s School District’s athletic facilities that could be in line for an upgrade.

The Mount Pleasant Board of Education has heard, loud and clear, community complaints about the dismal condition of its high school’s and middle school’s athletic fields – and has sketched out the necessary steps to improve them.

Superintendent of Schools Dr. Kurtis Kotes sent out a Nov. 15 letter to the community about the next steps to be taken toward establishing goals to put a referendum on the ballot. He wrote in the correspondence that he anticipated that the district was eyeing a bond issue to put to voters next spring.

At the Nov. 20 board meeting, Kotes went into more detail, stating that to initiate the process the district has to begin the state environmental review. He expected the board would start that process at its Dec. 4 work session.

“We hope also to have a presentation by the district architect, at our regular business meeting on Dec. 11, on what the board is considering in terms of the scope of work,” Kotes said.

Based on what has been seen so far, the superintendent said the board has an idea of what it wants to get done and how to get there.

“As we get closer to the presentation in December, we’ll be able to codify exactly what that work will look like,” he added.

During a special meeting at Westlake High School last January, residents decried the condition of the athletic fields, which they considered substandard and embarrassing, and to plead for artificial turf. Others asked for a press box along with lights for nighttime events.

In recent seasons, some games have been forced to be moved to alternate sites because of field conditions, community members said at the meeting last January.

Kotes pledged that residents would be kept apprised of school officials’ decisions.

“We’re still in the planning phases,” he said. “But we will be sure to make every effort to communicate, every step of the way, what the board is contemplating.”